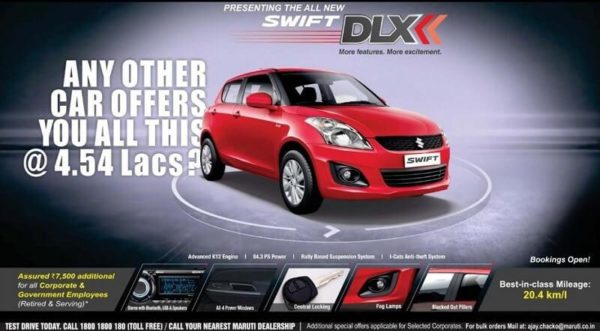 DLX edition available on base trims with added accessories.

The Maruti Suzuki Swift has been facing tough competition and sales have been on a decline. The company has introduced a new special edition call Swift DLX and offers more features over the standard LXI and LDI variants.

The DLX variant comes at a premium of around Rs. 20,000 on the LXI and LDI variants.

The DLX edition has is purely cosmetic changes and there are no mechanical changes.

Maruti is also offering assured Rs. 7500 cash back in addition to the accessories for government and corporate employees.

The new generation Swift is into development and from the spy pics it seems like the car is final test phase. The Swift will continue to be powered 1.2-litre K-Series petrol which makes 85 Ps and 115 Nm of torque and FIAT sourced 1.3-litre DDiS diesel which churns out 75 Ps BHP and 190 Nm torque.

Maruti Suzuki will have a good one year and we can expect more Swift editions to keep sales momentum.

Maruti Suzuki has some news too rejoice, with the newly launched Celerio registering 1000 bookings per day. Launched at the Auto Expo, the Celerio is the first car in India to be offered with an […]