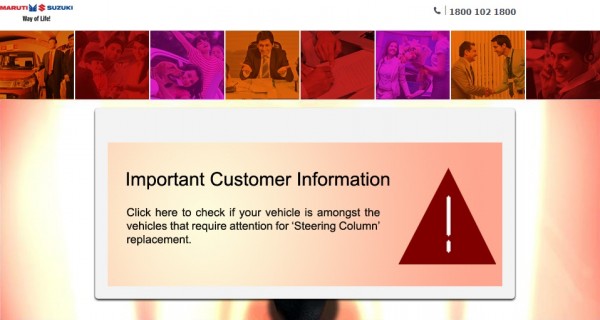 India’s largest car maker has issued a recall of 1492 vehicles. The Ertiga MUV, Swift hatch, Dzire sedan and the A-Star hatchback models which are manufactured between 19th October 2013 and 26th October 2013 are being recalled to fix and replace the defective steering column. The recall exercise is limited to cars manufactured during the specific period in India only and the cars which are exported have not affected.

The new steering column has been dispatched to the dealer workshops. Maruti Suzuki dealers will contact owners of all vehicles for cars which are manufactured during between 19th October 2013 and 26th October 2013.

Users of Maruti Suzuki cars (Ertiga, Swift, Dzire and A-Star) purchased during the same period can also check on the company website www.marutisuzuki.com to ascertain if their car is among the above mentioned vehicles. The customer is requested to fill in the chassis number (MA3 followed by 14 digit Alpha-numeric number) on the computer screen. The chassis number is embossed on vehicle ID plate and is also in the vehicle invoice / registration documents.

Customers may also contact the nearest Maruti Suzuki dealer workshop to ascertain if their car is among the above vehicles.

306 units of Ertiga MPV, 592 Swift hatchback, 581 Dzire compact sedan and 13 A-Star compact car have been affected by the steering problem under this recall.

July is going to witness a plethora of launches.  To start with we will have the Tata Motors Bolt & Zest, followed by Volkswagen Polo and Nissan Sunny facelift. How can India’s largest car maker […]