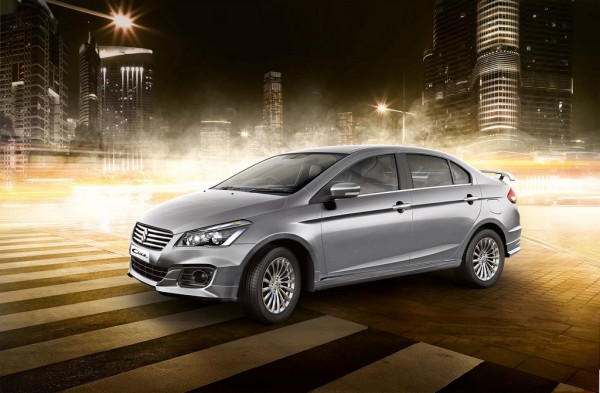 Maruti Suzuki has been launching a slew of products this festive season. Maruti introduced the S-Cross, Ciaz SHVS hybrid a month back, recently introduced the refreshed Ertiga and a number of limited editions. The company will launch the most awaited hot hatch segment Baleno on the 26th. In the midst of all this, Maruti has introduced a new version of the Ciaz, known as Ciaz RS.

Ciaz RS comes with new sporty black interiors and a stylish grey chrome finish instrument panel. The exterior comes with a spoiler pack which includes front under spoiler, side under spoiler, trunk lid spoiler and rear underbody spoiler – impart a distinct sporty look to Ciaz RS while enhancing the aerodynamics of the car.

Ciaz RS offers all the features and benefits of Ciaz Z+, and is available in petrol and smart hybrid diesel options.

The Ciaz has been well accepted in the Indian market and sold over 56,000 sold since launch in October 2014. Maruti Suzuki introduced the Ciaz SHVS with smart hybrid  technology on the diesel engine option making it India’s most fuel efficient diesel car at 28.09 Km/litre.

The Ciaz comes with SmartPlay Infotainment system and safety features like dual airbags and ABS offered from base variants.

The Ciaz has dethroned the Verna to second position and has been trying hard to catch up with Honda City which rules the segment. Maruti is hoping to close the gap with the new Ciaz RS variant.

The most anticipated motorsports event in South, the Maruti Suzuki Dakshin Dare, flagged off its 9th edition on July 16, from Orion Mall, Bengaluru, with a power packed participation of 180 rallyists. Adding a new […]

First time in the history of Desert Storm, a 150 kms long night-stage to be held in first-leg Defending champion and Dakar rally winner, CS Santosh will be aiming for the title 130+ motorsport enthusiasts […]