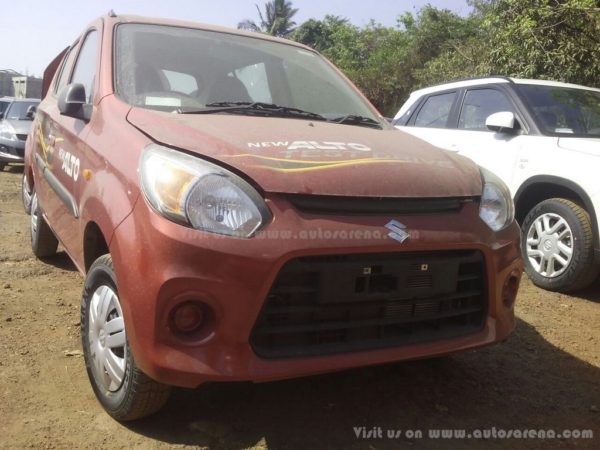 Feeling the heat from Renault Kwid and soon to be launched Datsun Redi-GO, India’s largest car maker is all set to launch the Alto 800 facelift soon. The demo cars were spotted at a dealer yard in Goa and we also managed to snap the interiors of the car.

The Alto 800 facelift gets a new front with a new design bumper which is more squares and gets a large black trapezoidal shaped air damp with vertical slats. There is also provision for fog lamps which is not there in the current model. There is also no chrome element on the grille and the logo is now placed on the bumper unlike on the grille between the bumper and bonnet in the current model.

The headlamps get slight tweaking with orange elements and the car look a bit more promising than the pre-facelift model. There are no changes to the side and rear of the car. The interiors are also untouched except for the lighter shade of cloth used on the door panels.

The current Alto is available with in petrol and CNG fuel options and will continue to be offered in the performance figures. The Alto 800 is powered by 3 cylinder 796 cc petrol engine which develops 48 PS @ 6000 rpm max power and maximum torque of 69 Nm @ 3500 rpm.

The car is sold in 10 variants and Maruti Suzuki will continue to offer safety pack as an option. Prices could be revised slightly in tune of Rs. 5000 to 10,000 depending on the variants.

The largest selling car has faced some serious competition from Kwid which has been eating into numbers and Tiago from Tata Motors for the higher variants. The company wants to protect its market share and this move could be a temporary solution until the new Gen Alto 800 gets launched.

Maruti Suzuki Ignis launch on 13th January unveiled in Delhi. Maruti Suzuki is all set to launch the Ignis urban hatchback or compact crossover in the Indian market. The new model will retail via the […]