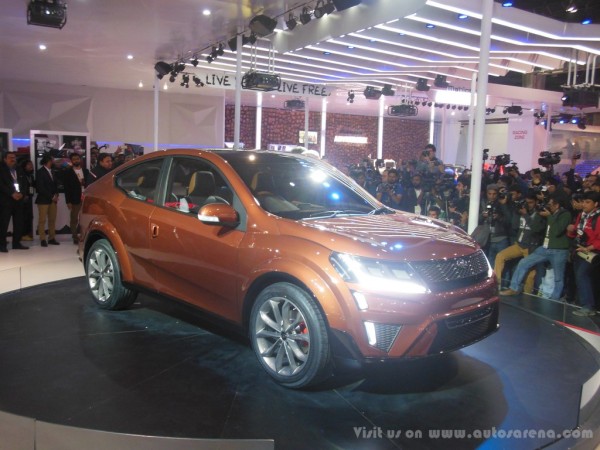 Mahindra XUV Aero when launched could be the poor man’s BMW X6.

Mahindra & Mahindra have been ruling the SUV segment for quite some time now with many successful models like the Bolero, Scorpio and the XUV 500 taste sweet success in the Indian market.

The recently introduced TUV 300 compact SUV and the KUV 100 micro SUV have also been received quite well by Indian customers. Having tasted success SUV segment, Mahindra now seems to be shifting focus on the coupe SUV segment which was first introduced by BMW with the launch of X6 Sports Coupe.

Mahindra & Mahindra unveiled the XUV Aero concept at the 2016 Auto Expo after dropping a teaser a few days before the expo began.

The side profile looks interesting with the coupe like sloping roofline which neatly integrates in the rear. The large rear wheel arches which starts from the rear d00r and flows into the rear. The rear gets a high boot lid with large LED tailamps. Lower down there is a large diffuser which further accentuates Mahindra XUV Aero’s Coupe look. The concept also features large matte silver alloy wheels with red brake callipers.

The interior get a large touchscreen at the centre and also demonstrates Mahindra’s new Infotainment system and connectivity which could trickle down into current and future Mahindra models. Powering the XUV Aero is a brand new 210 bhp 2.2-litre mHawk, 4-cylinder, diesel engine. The XUV Aero concept also gets multiple driving modes Sport, off road, street and Race mode.

Mahindra said that the XUV Aero concept could hit production in the near future if they receive good feedback from the press and public at the 2016 Auto Expo.  Pricing however could be upwards of Rs. 22 lakhs which could be bit higher for a Mahindra barnd, but in the end what you do get is a BMW X6 inspired Coupe SUV at a very affordable price packed with loads of technology.

Mahindra has been working on a upgrade for the Maxximo for quite sometime. The company recently introduced the Jeeto LCV in seven variants to take on the last mile delivery leader Tata Ace. With the […]