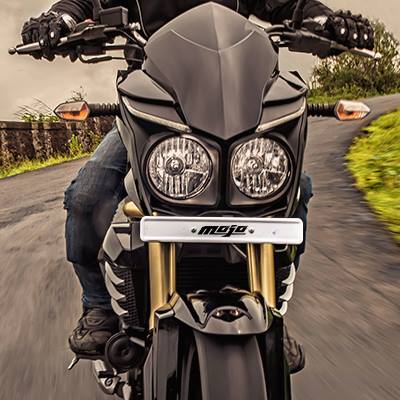 Mahindra 2 wheelers are all set to launch the new Mojo motorcycle in the Indian market and have unveiled the logo. The official launch is on October 16th.

The Mahindra Mojo 300 launch has been awaited for the last couple years ever since the bike was first showcased in 2011 followed by 2012 Auto Expo. The bike also made its appearance at the 2014 Auto Expo and is now finally being launched in the Indian market after extensive testing.

The unique and distinct logo has a sharp impactful design, with which Mahindra Two Wheelers aims to create a distinct identity for its premium motorcycle. The logo was designed after extensive research into the needs and requirements of new age motorcycle enthusiasts as per the company press release details.

The stylized font draws inspiration from the overall aggressive edgy styling of the Mojo, while the sharp lines and angular intersections highlight controlled dynamism. The smooth chrome casing lends a premium and exclusive quality that is an innate part of the Mojo’s persona.

The logo amalgamates the motorcycle’s bold predator styling and unparalleled performance with Mahindra’s DNA of being bold, tough and masculine.  We believe it will appeal to motorcycle enthusiasts as it will be seen as an extension of their personality.

The Mahindra Mojo 300 is powered by a 296cc liquid cooled, 4-stroke single-cylinder engine which produces max power of 27bhp at 8,000rpm and a peak torque of segment leading 30Nm at 6,500rpm.

The Mahindra Mojo 300 will be the flagship motorcycle and could be most likely priced close to Rs. 2 lakhs. The Mojo 300 will compete with the likes of Kawasaki Ninja 300R, Honda CBR 250R, KTM Duke 390/RC 390 and Yamaha YZF-R3 in the Indian market.