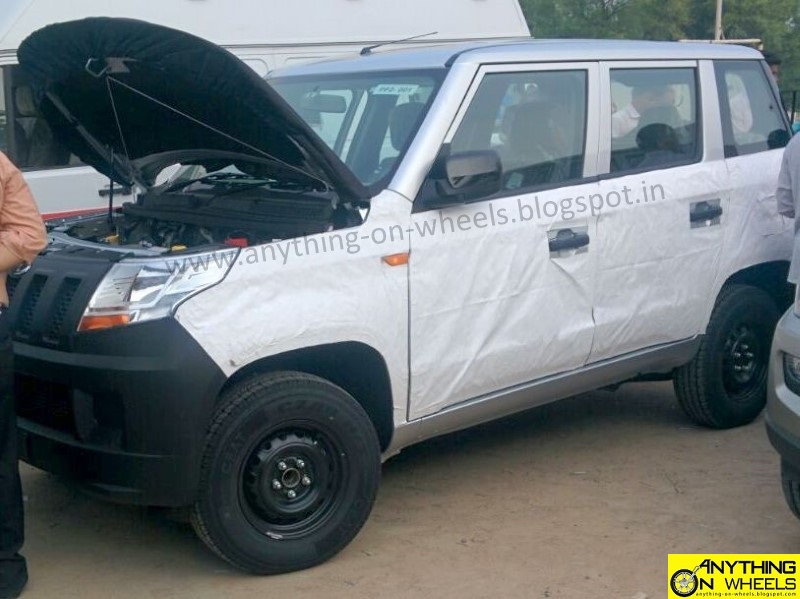 Mahindra & Mahindra recently announced the name of the new upcoming SUV code named U301, TUV300. The company did share a few sketches of the new utility vehicle which looks quite promising.

The TUV300 has been caught completely undisguised. From the images the vehicle seems to the base variant with balck bumpers, ORMVs and door handles.

The flat bonnet, squarish front and high ground clearance give it the real SUV characteristics. The front grille a typical Mahindra design with vertical slats extends into large bumper which adds to the muscular look. The rear minds us of the SKODA Yeti with vertical headlight and glossy black finished D-Pillar. The spare wheel is mounted on the tailgate and not underneath like many urban SUVs. The design seems to be clean and simple unlike the XUV500 which seems a bit overdone.

The TUV500 will be under four metres and powered a new mHawk 80 diesel engine.  A 5 speed manual transmission will be standard and AMT in future.

The launch is mostly before Chaturti and bookings could start any time soon. Mahindra have planned an onslaught of launches this financial year which started with the XUV500 facelift and followed by Thar facelift.