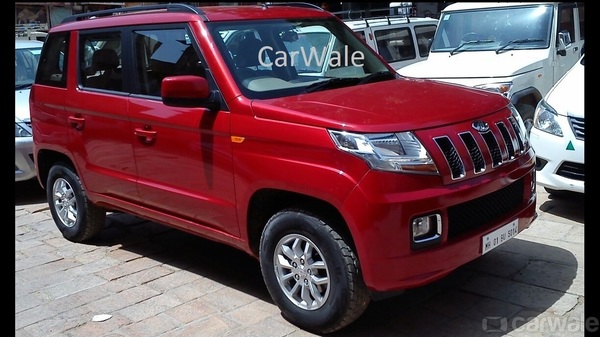 Mahindra TUV 300 has been spotted undisguised at Bikaner without any camouflage most likely during a commercial shoot. The TUV 300 will be officially introduced in India on the 10th of September and will be the second product from utility major Mahindra &Mahindra under four meters.

TUV or Tough Utility Vehicle comes with a boxy design, large headlamps, a vertical slat grille which is completely different from the likes of Scorpio and XUV500. The fog lamps are also suqre shaped with chrome bezels. The side profile shows the sub-compact dimensions and the slating roofline gives a sporty character. Rear design is boxy with vertically stacked tail lamp clusters and externally mounted spare wheel. 10 spoke alloy wheels fit neat in the square shaped wheel arches.

The TUV 300 is a rear wheel drive and will be powered by new mHawk 80 diesel engine. The unit is believed to be a version of the 1.5-litre, 3-cylinder power plant from the Quanto with a power output of 100PS and 240 Nm of torque. TUV 300 will also be available with an automatic AMT gear box.

The SUV is based on the new hydroform ladder frame chassis which shares with the Scorpio but has been shortened. The TUV 300 will offer 5+2 seating making it a seven seater. The 3rd row will get jump seats like the Scorpio and Quanto.

The TUV 300 will help Mahindra to attract a young set of buyers mainly in the rural towns where the company has a strong hold.

Mahindra is also testing the S101 which is also a sub-four meter SUV but is a front wheel drive based on a new platform.

Mahindra aims to further strengthen its position in the SUV segment and is looking at various options to tap the growth. The Indian company is working on a smaller SUV code named S101 which will […]

Mahindra & Mahindra recently announced the name of the new upcoming SUV code named U301, TUV300. The company did share a few sketches of the new utility vehicle which looks quite promising. The TUV300 has […]