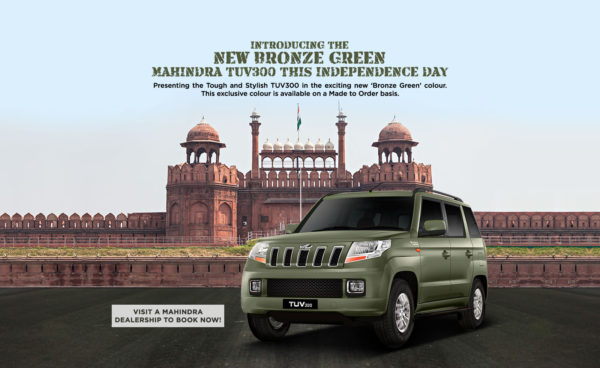 Mahindra TUV 300 Bronze Green color is made to order.

Utlty major Mahindra & Mahindra has introduced a new color option on the TUV 300. Mahindra TUV 300 Bronze Green color was introduced on the Independace day  and is made to order basis.

There are no other changes made to the TUV300 and the colour is similar to the Army Green shade avaible on various defence vehicles.

At the time of official launch Mahindra had introduced the Olive Green shade on the TUV 300.  Group Chairman of Mahindra & Mahindra has got himself a new pair of wheels.

The TUV 300 presented to Mr. Mahindra bears an Olive Green shade which is made to order and is heavily customised Armour Body Kit using Mahindra genuine accessories offered on the TUV 300 from Mahindra.