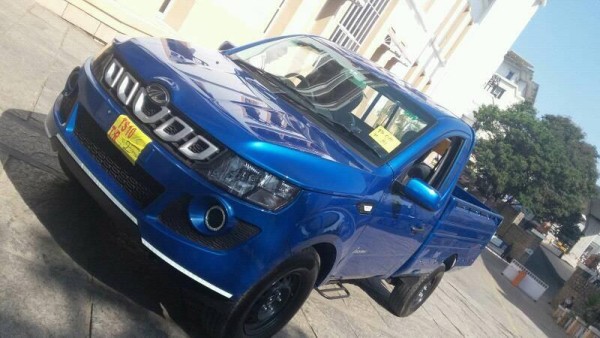 Mahindra to consolidate its leadership in Small Commercial Vehicles (SCV) with the Imperio pick-up truck range.

The Imperio pick-up, code named (U220) is positioned as a premium product in the segment of small commercial vehicles and will likely compete with Isuzu D-MAX.

The Imperio pick-up truck will borrow the underpinnings from Genio pick-up and will most likely replace this model from the export markets. The interior seem to have been borrowed from the Genio pick-up and features a 3 spoke steering wheel, large instrument dials and AC vents to be available on the top variants.

From the images the Imperio gets a new Mahindra family look grille, coloured bumpers, coloured ORVM and attractively designed headlamps.

Mahindra will launch the Imperio 4×2 for the Indian market and for the export markets may consider a 4×4 and more powerful 2.2-liter mHawk engine. The Imperio will be exported to markets like South Africa, East Africa and Australia.

Pricing and more details will be revealed at the official launch.

Pics of the Imperio Pick-up snapped by BharatAutos

Group Chairman of Mahindra & Mahindra has got himself a new pair of wheels. Mr. Anand Mahindra has bought a new customised TUV 300 SUV for personal use. During the launch the Chairman had showed […]