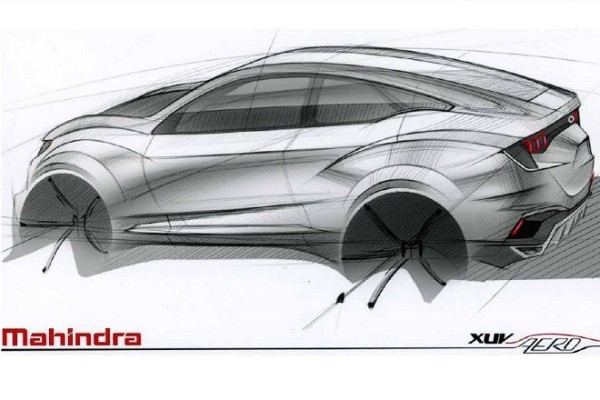 Mahindra & Mahindra have been the leader in the SUV segment and the brand has seen models like the Bolero, Scorpio and the XUV 500 taste sweet success in the Indian market. Mahindra recently introduces two new offerings, the TUV 300 and the KUV 100, both of which have been received quite well by Indian customers.

In 2011, the XUV 500 made its debut in the Indian market, but what led to its success was XUV 500’s cheetah like looks, Premium interiors and the fact that it was a Mahindra became the icing on the cake.

Mahindra is now planning a coupe styled SUV much like the BMW X6 and the newly launched Mercedes Benz GLE Coupe. The company has released a teaser sketch on the internet. The new Coupe style SUV is called XUV Aero and the concept version of the XUV Aero at the 2016 Delhi Auto Expo.

The XUV Aero mimics the XUV 500 but gets a slopping roofline and is likely to get horizontally placed tailamps and muscular looking bumpers, wheel arches and faux diffusers. The XUV Aero concept will also be a demonstrator for Mahindra’s new Infotainment and connectivity features that will find their way into future Mahindra models.

Powering the XUV Aero could be a 2.2 litre Mhawk diesel or the 1.9 litre diesel which currently powers the standard XUV 500 with more power and torque figures tuned to deliver more power over the standard SUV.

The Mahindra XUV Aero concept has been designed entirely by the company’s Indian design team.

Mahindra has always been innovating itself with new models, new technologies and the company also managed to beat the ban on cars with engine capacity above 2 litres with an all new 1.9 litre diesel engine.

Mahindra also launched its first ever Petrol engine on the new KUV 1OO recently, with the XUV Aero, Mahindra could also consider a petrol XUV expanding the XUV line. The XUV Aero could very well serve as a flagship product for the company priced in the range of Rs. 16-20 lakhs.

Delhi Auto Expo is the largest and most anticipated motor car event in India. Organised by the CII, SIAM and ACMA, it is held in New Delhi biennially. The 2016 edition of the expo promises […]