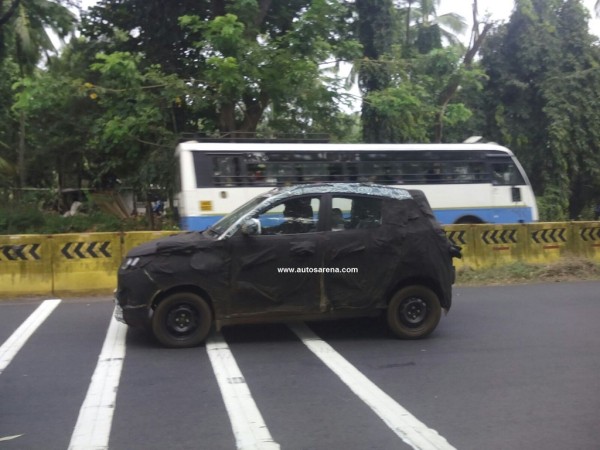 Mahindra to call its new compact crossover code named S101 KUV 100. It was also rumoured to be knonw as XUV 100. The official announcement will happen on 18th of December.

Utility major Mahindra & Mahindra is all set to announce the name of the upcoming compact crossover code named S101. If sources are to be believed the compact crossover will be known as KUV 100. After the success with XUV 500, Mahindra has been following the alpha numeric nomenclature for new products and has been successful so far with the products.

Following a similar alpha numeric nomenclature the KUV 100 will be the smallest member in the Mahindra family and will compete with the likes of Maruti Suzuki Wagon R, Chevrolet Beat and Hyundai Grand i10.

The official launch will happen just before the auto expo in the third week of January 2016 and could be priced at Rs. 4 lakhs for the base model. The vehicle will measure less than 4 meters and will qualify for the lower excise duty.

The Mahindra KUV100 will be offered in both petrol and diesel engine options. A new 1.2-litre three-cylinder petrol engine developed in-house in conjunction with Ssangyong will debut on the vehicle and is likely to make 75PS of max power and 110 Nm of torque. The 1,500cc mHawk80 diesel unit which first made its debut on TUV 300 will be available with similar power and torque figures. Both engines will be coupled with a five- speed manual or an automatic transmission.

The KUV 100 will offer a unique 3+3 seating arrangement and will be offered with a long list of features to make it a good value proposition.

Safety features like ABS, Dual airbags could be offered as option right from the base variant which is now being offered by Maruti Suzuki on its popular models.

More details to be announced on 18th December in Mumbai where the company has organised a press event.