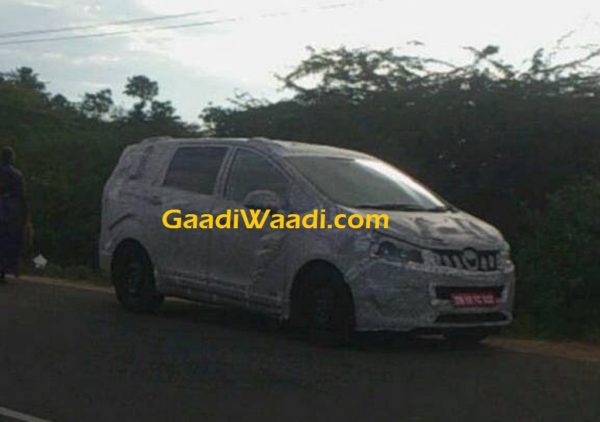 The new MPV caught testing could be called Mahindra TUV500.

Utility major Mahindra & Mahindra had announced earlier to launch an MPV to compete with the likes of Toyota Innova Crysta. The success of Innova and the new launched Innova Crysta in the Indian market has made auto makers look at this segment more seriously.

Mahindra introduced the Xylo based on the Ingenio platform but could not compete with the Innova head on. Mahindra launched a facelift with major changes, but this too did not make any serious effect.

The company has been working on the MPV and this time the company has used all the experience it has gained from the XUV500 and the newly launched products.

Rumoured to be known as the TUV500 the new MPV from Mahindra will be based on the new Hydro form chassis which also under pins the Scorpio.

From the pics its evident the MPV is large in dimensions and gets an aggressive front facia similar to the likes of XUV500. Projector headlamps with DRLs, front fog lamps and typical Mahindra grille dominates the front while rear could get LED tail lamps.

The cabin will be designed on similar likes of the XUV with all the comfort features. A touch screen with navigation may be offered on the top models.

Engine options include a 2.0 or 2.2 mhawk diesel engine and probably a new petrol engine. A 6 speed manual and automatic transmission will likely be offered.

The new MPV could be positioned above the current Xylo and will be available in 7 and 8 seater options. Captain seats in the middle row will also be available.

The new MPV will be positioned above the Xylo and may or may not replace the Xylo altogether. The company will target the personal segment and a stripped version may be launched for the fleet and taxi segment.

The vehicle was caught testing alongside the new Innova Crysta which will is the current benchmark.

The new MPV could be launched in 2017 and will be priced competitively.

Mahindra & Mahindra has launched the new TUV 300 SUV in the Indian market at a starting price of Rs. 6.9 lakhs. The true Blue SUV is powered by a new mHawk80 Diesel Engine with […]

Mahindra Jeeto celebrated its first anniversary in Indian market. The mini truck launched in 8 variants has garnered 20% market share in just a year of its launch. Jeeto has helped the company to establish […]