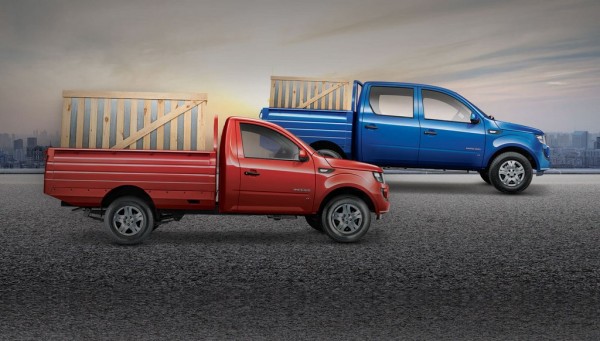 Mahindra Imperio pick-up truck range launched in India, starts at Rs. 6.25 lakhs. To create new a benchmark in the pick up segment with its stylish SUV looks, superior performance and car like comforts

Mahindra has introduced the Imperio pick-up truck, positioning it in the premium segment. The Imperio is available in single and double cabin and will replace the Genio in the Indian market which saw luke warm response.

The Imperio does have one of the best front styling amongst Indian pick-up trucks with a toothed distinctive front grille with squared shaped headlamps, aggressive design bumpers and proportionate dimensions which give the vehicle strong road presence.

The interiors are similar to the Genio but gets black color scheme. Interior features include ergonomically designed car-like seats, air conditioner with 4 step blower, 2 Din music system. The double cab variant gets a rear bench which can seat 3 passengers.

Power to the Imperio comes from a 2.5 litre 4-cylinder engine with common rail technology, which offers 75 horsepower and a 220 Nm of torque. The pick-up has a maximum payload of 1,240 kilograms. With a top speed of 120kmph speed the pick-up truck has a decent mileage of 13.55 km/l. Mahindra has also offered the Fuel Smart technology that enables one to choose between power and fuel economy similar to that found on the Maxximo. Brake are fitted with LSPV for effective braking.

The Imperio comes with an exceptional warranty of ¬3 years/1 lakh kms (whichever is earlier).

After keeping tight lipped for months, Mahindra has finally revealed the name of its upcoming SUV, project code U301 as Mahindra TUV300. TUV300 is pronounced as TUV, 3 double ‘Oh’, the ‘T’ in TUV300 stands […]