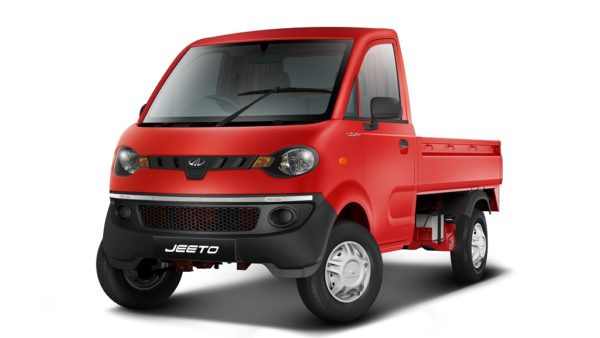 Mahindra Jeeto celebrated its first anniversary in Indian market. The mini truck launched in 8 variants has garnered 20% market share in just a year of its launch. Jeeto has helped the company to establish it as a leader in small commercial vehicle segment.

To celebrate Jeeto’s first anniversary and keeping with its customer centric initiatives, the company offered an exchange offer of upto Rs. 20,000. Jeeto also comes with a warranty of 2 years or 40,000 km (whichever is earlier) on the Jeeto.

Launched in June 2015, the mini truck has successfully established Mahindra as a leader in the small commercial vehicle segment. Further, with superior product performance, lower maintenance, best in class mileage of upto 37.6 km/l and the promise of a 30% higher earning potential.

Jeeto is the first ever product in its category with a modular range of 8 mini-trucks to cater to the varied needs of the sub 1 tonne load segment customers.

Going beyond the product’s performance, Jeeto also features in the Make in Telangana video and has received excellent response from ecommerce and captive customers. Amazon has chosen Jeeto as a preferred vehicle for its two wheeler upgrade program.

Mahindra Electric all-new electric car to be called e2o Plus

4 door Mahindra Electric e2o hatchback to be christened e2o Plus. Mahindra Electric, the newly formed entity has announced the name of its eagerly awaited new electric car to be e2oPlus. e2o Plus is essentially […]

India’s largest utility maker, Mahindra & Mahindra have introduced the new generation Scorpio in the Indian market. The launch of the new Scorpio comes after 12 years the SUV first made its debut in India. […]