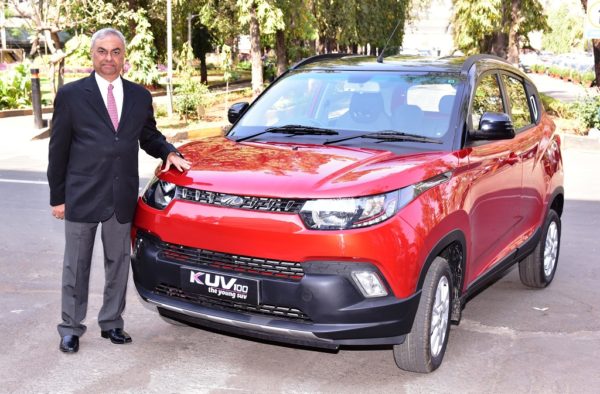 Utility major, Mahindra & Mahindra has introduced the KUV100 anniversary edition in the Indian market. the

The anniversary edition comes with the following features

The KUV100 anniversary edition with new features is available on the K8 6 seater variant in both petrol & diesel options.

In addition to this the K6 & K6+ variant will now be available with spider design 14” alloy wheels.

The company has also introduced personalization kits with sporty and premium accessory kits.

Mahindra had showcased the KUV anniversary edition at the 2017 Autocar Performance show. Bookings are open at all Mahindra dealerships with immediate effect.

Launched in January 2016, the KUV100 has made its presence felt in a very short time, having sold more than 42,000 units since launch.

“On the first anniversary of KUV100, we would like to thank our customers for their support in creating a new SUV segment. The KUV100 has the appeal of an SUV and the practicality of a compact car, making it a compelling value proposition. At Mahindra, we constantly update our products in keeping with the latest trends. We have introduced the new avatar of the KUV100 with dual tone exterior colour, sporty and premium black interiors and bigger dynamic design alloys wheels along with various accessory kits. We are confident that it will further build on the KUV100’s style quotient and make it a popular choice amongst the youth.”

Mahindra Imperio pick-up truck range launched in India, starts at Rs. 6.25 lakhs. To create new a benchmark in the pick up segment with its stylish SUV looks, superior performance and car like comforts Mahindra […]

Mahindra has been working on a upgrade for the Maxximo for quite sometime. The company recently introduced the Jeeto LCV in seven variants to take on the last mile delivery leader Tata Ace. With the […]