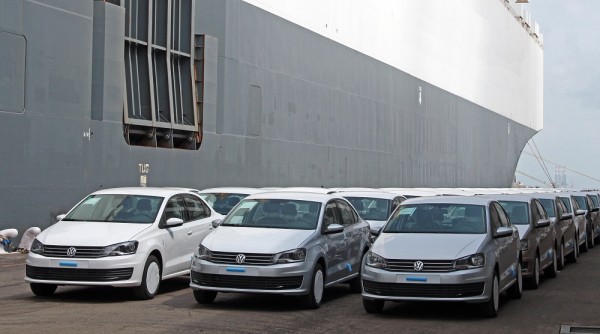 Volkswagen recently launched the made in India Vento sedan in Argentina on the 10th of November where it will be sold as Polo sedan. The Polo is launched as a CBU in the South American market and was showcased for the first time at the Buenos Aires Motorshow in June 2015.

The Polo sedan in Argentina will get the 1.6-litre MPI petrol engine with five-speed manual as well as 6-speed automatic gearbox. The engine develops 105 Ps of max power.

Volkswagen has been the market leader in Argentina for 12 consecutive years with a market share of almost 22%. The new Polo sedan will further strengthen the product portfolio for the German car maker in Argentina.

For Volkswagen India this is another major milestone for the company in its export business and displays Volkswagen India’s commitment towards producing top-notch quality for global markets.

Volkswagen India started exporting cars from its Pune Plant in 2011 with the first export market being South Africa. Since then, the export operations of Volkswagen India have expanded to over 35 countries across four continents of Asia, Africa, North America and South America. The range of cars being exported includes left-hand drive as well as right-hand drive cars. Additionally, Volkswagen India also exports parts and components of its cars to Malaysia which are assembled there for the Malaysian domestic market. Volkswagen Pune Plant has produced over 156,000 cars for export till date.

Volkswagen announced its monthly sales performance for November 2016, selling 4,014 units as compared to 1,942 units sold in the corresponding month of the previous year. Achieving an upward growth curve, VW attributes majority of […]

Volksfest 2014 to be held across India from 8th October to 31st October All existing and prospective customers are welcome to participate in Volksfest 2014 Volkswagen, Europe’s leading car manufacturer today announced ‘Volksfest 2014,’ a […]

Heat Recovery from Top Coat Oven in Paint Shop will reduce energy consumption by 4953 MWh/a and CO2 emissions by 1013 tons/a Energy savings from this Volkswagen Think Blue. Factory. project are equivalent to the […]