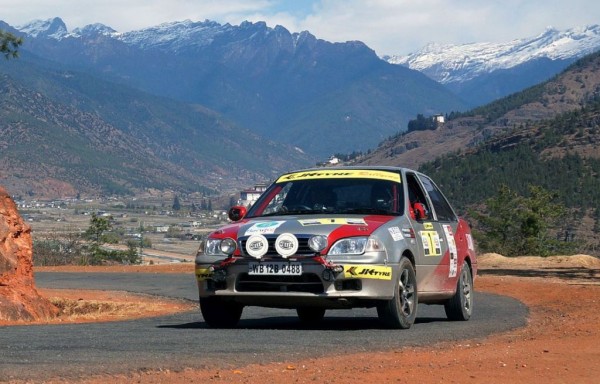 The first 3 editions of Himalayan Drive; held in March 2013, January 2014 and January 2015 witnessed tremendous success and this edition took the event to a higher level crossing international borders. These events have gone a long way in popularizing adventure motorsports in the Eastern Himalayan region.

The rally, which started from Siliguri’s City Center on Sunday, 28th February 2016, culminated at the same venue on Thursday, 3rdMarch 2016 afternoon. The rally route covered the forests, tea gardens and riverbeds of North Bengal and the Duars, narrow roads skirting the precipitous mountain slopes of the eastern Himalayas, the picturesque Paro Valley in Bhutan, a high mountain pass and the fog-enveloped Darjeeling Hills.

Sudip Ghosh, the driver of the winning team, said: “The rally was tough and challenging, however, driving at such a high altitude and difficult terrain was equally thrilling. My driving mettle was put to severe test. Winning this rally brings to me a tremendous sense of achievement”.

JK Tyre & Industries Limited, India’s leading tyre manufacturer, has been associated with Himalayan Drive as the Title Sponsor since its inception in 2013. Speaking on the association Mr. Sanjay Sharma, Head Motorsports, JK Tyre & Industries Ltd., said “The 4th edition of the rally has been a great success. It is for the first time that this rally has travelled to international terrain and the Government of Bhutan has been extremely supportive. I am very sure with this kind of support and love for motorsports we can keep promoting our initiatives beyond national borders.”

Tamal Ghoshal, Director of Just Sportz, the organizer of the event was upbeat with the success of the Rally as besides this being an Adventure Sports Event; it was aimed at betterment of relations between Bengal and Bhutan. “Taking a cue from this year’s success story, we are hopeful we would be able to take one step forward by adding Nepal to our Rally Route thus making the fifth edition of Himalayan Drive a Tri Nation Rally,” said Ghoshal.

The Himalayan Drive, since inception has drawn the attention of rally drivers from across the country due to the varied, challenging and extremely picturesque terrain that the rally route covers. This year, the international leg of the rally through Bhutan was a game changer and received a highly enthusiastic feedback from all participants.

JK Tyre has always been closely associated with the world of sports. Almost three decades back the company laid down a long term and sustained approach to promote Motorsport. Participating in this form of the sport has helped the company in continuously updating its products to meet the challenges of grueling Indian conditions. The company not only made the sport affordable but also equivalent to International operating standards. JK Tyre’s foray into Motorsport was a well thought out strategic decision to not only use and develop this virgin branding platform but also to realize the dreams of making India a force in the field of motor sport.

In 2011, the company acquired the Formula BMW Series and rechristened it as the JK Racing Asia Series (JKRAS). By taking over the series, JK Tyre promises to utilize it as a platform to encourage and support the world’s best racing drivers and promote India as one of Asia’s motorsport capitals.  JK Tyre now stands closer to achieving its mission of bringing world-class motorsport to the Indian masses.

The Racing and Karting programme by JK Tyre has been the breeding ground for the country’s motorsport talents like Narain Karthikeyan, Armaan Ebrahim, Karun Chandhok, Aditya Patel and other emerging talent.

Another pioneering initiative was the launch of the Truck Racing Championship in India in partnership with Tata Motors. The company developed & designed ‘JetRacing’-the new generation truck racing tyres especially for this application. With this, JK Tyre became the first tyre company to produce truck racing tyres in India. The combination of the Prima trucks fitted with Jet Racing received an overwhelming response from participants and has definitely brought in a revolution in the Indian racing scenario.