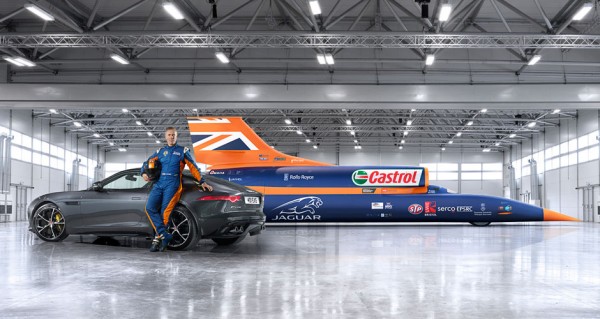 Jaguar revealed further details about the new partnership with the Bloodhound World Land Speed Record project following the significant high-speed test in South Africa earlier in the month, which marked the start of a major technical partnership between Jaguar and Bloodhound.

The test took place on the relatively soft surface of the Hakskeen Pan desert in the Northern Cape of South Africa, where the dynamic ability of the new all-wheel drive F-TYPE R Coupé – making its global motor show debut today in Los Angeles – enabled the successful completion of a vital communications test for the Bloodhound SSC team.

Jaguar is perfectly positioned to provide key technical knowledge and engineering innovation, resulting in direct performance benefits to the Bloodhound programme. As a ‘Main Partner’ and ‘Innovation Partner’, Jaguar will assist Bloodhound in raising the World Land Speed Record above 1,000mph, as well as helping to inspire the next generation of scientists and engineers, which is the overall objective of the project. The current record stands at 763.035mph and was set by Andy Green in Thrust SSC in 1997. As driver of the Bloodhound Supersonic Car, Andy Green will once again look to push the boundaries of human achievement when he attempts to break the record in 2015 and achieve in excess of 1000mph in 2016.

On the Jaguar stand at the LA Auto Show today Andy Green revealed further details of the partnership including the integration of the Jaguar engine into Bloodhound SSC. Jaguar’s 5.0-litre 550PS supercharged V8 engine will play a key role in the running of the car providing essential hydraulic services and also driving the rocket’s oxidiser pump. This pump will supply 800-litres of High Test Peroxide (HTP) to the rocket in just 20 seconds – equivalent to 40-litres (over nine gallons) – every second.

Jaguar is also assisting in the development of Andy Green’s cockpit design, creating the ultimate driving environment and providing Andy with the precision control required for the essential systems including electrics, hydraulics, engine start and control systems, safety monitoring and braking.

Finally, Jaguar confirmed it will be providing two high performance Rapid Response Vehicles to support Bloodhound SSC in the desert during the record runs in 2015 and 2016.

Phil Popham, Global Marketing Director, Jaguar said: “The Bloodhound project is one of the most inspirational and innovative currently in existence. Jaguar is delighted to be part of a project which inspires the next generation of scientists and engineers, whilst also supporting Jaguar’s commitment to high performance technology and our mission of advancing knowledge and improving lives. We are delighted to be able to provide direct engineering support for the Bloodhound project to assist in the achievement of their ambitions and it is fantastic to have Andy Green here today supporting Jaguar’s partnership announcement”.

Bloodhound SSC driver and current World Land Speed Record holder, Andy Green said: “It’s great news to have Jaguar as a Main Partner and Innovation Partner to the Bloodhound Project. Jaguar’s engineering and innovation knowledge is invaluable and the technological expertise Jaguar brings to the powertrain integration will provide a genuine performance enhancement to the project. While driving Bloodhound SSC I need to know I will have the responsiveness, performance and reliability required to power the rocket fuel pump and the Jaguar engine is the perfect tool for the job”.

Bloodhound Project Director and former World Land Speed Record holder, Richard Noble said: “The recent communications test in South Africa proved that Jaguar is the perfect partner for the Bloodhound project. The AWD F-TYPE R Coupé performed exceptionally well on the Hakskeen Pan and we are looking forward to returning for the World Land Speed Record attempts next year with the specially prepared Rapid Response Vehicles – this is a genuinely exciting time for the project and we’re delighted Jaguar are part of our journey”.

BLOODHOUND SSC is currently being assembled at the BLOODHOUND Technical Centre in Bristol, UK. It is on schedule for roll out summer 2015 where it will undergo UK runway testing up to 200mph (321km/h) at the Aerohub, Newquay, UK. The Team will then deploy to South Africa to begin high speed testing with the target of reaching 800mph (1,287km/h). The Team will return to the UK to review the data and return to South Africa in 2016 with the aim of reaching 1,000mph (1,609km/h).