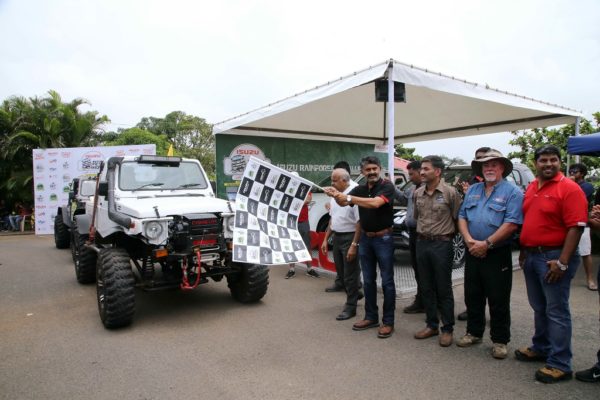 39 teams from across the country to compete from 22nd July to 28th July in India’s toughest international off-road motorsport event.

Dona Paula, July 21, 2018: ISUZU RFC India 2018, the fifth edition of India’s most prestigious international off-road motorsport event, is back in Goa. With competitive stages starting from tomorrow, ISUZU RFC India 2018 will be held at various locations across the State over the next seven days before the announcement of the winner on 28th July.

This year, 39 teams, each consisting of a driver and a co-driver, will compete against each other, with the top Indian driver of the competition getting monetary benefits worth USD 10,000, including a free automatic entry worth USD 3,900 to the Rainforest Challenge (RFC) Global Series Finale to be held in Malaysia at the end of the year.

RFC India was launched by Delhi-based Cougar Motorsport Pvt. Ltd. in 2014. It is the India Chapter of the Rainforest Challenge of Malaysia, which is listed among the top ten toughest motor races in the World and has over 51 editions being held in 21 countries worldwide. Though merely four editions old, RFC India is unarguably considered as the country’s toughest international off-road motorsport competition and is counted amongst the top three toughest events in the RFC Global Series. In the last three years, the event has had four successful editions in Goa as well as two regional chapters in Bengaluru and Chandigarh.

Out of the 39 contenders in ISUZU RFC India 2018, the UTs of Chandigarh and Delhi are sending 3 teams each; 4 teams hail from Goa; 10 from Kerala; 7 from Hyderabad; 5 from Karnataka, including a Ladies Team; 3 teams hail from Maharashtra and Arunachal Pradesh each; and 1 from Tamil Nadu.

Cougar Motorsport’s Founder & Director Mr. Ashish Gupta said, “This year we have the first-ever participation from the North-East; the host state is sending its largest-ever squad; we also have a record 10 teams from Kerala, which is the highest number of participating teams from any state ever. We have always desired to grow this sport beyond its male-centric image and I am delighted to welcome an all-ladies team, after a gap of four years. The interest in RFC India among Indian offroaders, which supersedes all boundaries of age, gender and region, proves that we have been successful in our quest of uniting the best offroading talent of India on a single platform.”

He added, “It is great to see the growth this sport has witnessed in merely five years since the launch of RFC India. In 2016, the RFC India Champions Gurmeet Virdi and Kirpal Singh Tung made our country proud by winning their category at the RFC Global Series Finale in Malaysia. Our other contenders have also had phenomenal performances in various national off-road motorsport events. In each edition, we have had a substantial number of off-roaders making their RFC India debut. In fact, 13 rookie drivers will be participating in ISUZU RFC India 2018, with one of them being merely 18 years old. This speaks volumes about the substantiality of this competition in the country’s off-roading context and our determination to develop Indian motorsport at large.”

The competition will be spread across 26 Special Stages (SS) that will test the contestants’ driving and vehicle recovery skills, team spirit and their physical and mental endurance under extreme off-road conditions. Based on a point system, the competitors will earn set-points on successful completion of stages. However, penalties will be incurred in case of failure to complete a task, non-adherence to the rules or environmental damage at the event location. The team with maximum points in their account at the end of the competition will win the coveted ‘ISUZU RFC India 2018 Champion’ title.

Capt. J. Shankar Srinivas, Vice President – Service, Customer Relations, EA & PR, Isuzu Motors India, said, “ISUZU Motors India is proud to be associated with RFC India this year. ISUZU has always been in the forefront in offering vehicles that are highly durable, reliable and capable, which has been proved in many toughest rally raids across the world. This platform gives us an opportunity to showcase the vehicle attributes to those off-roading enthusiasts and also promote the spirit of adventure in the country. I wish the best to the participants of ISUZU RFC India 2018.”

Season 5 of this mega off-road motorsport event will be kicked-off in off-road terrains in the Goan hinterlands and gradually move towards the urban centers. Screening the participating vehicles for their adherence to RFC India mandatory specifications, the vehicle scrutiny was held today at the International Centre Goa (ICG) in Dona Paula. The contestants who successfully cleared the scrutiny proceeded for a ceremonial flag-off, held at the same location.

The first set of the Special Stages will be held at DOT in Village Kumbhari of Taluka Sanguem on 22nd and 23rd of July. The competition convoy will thereafter move to Suquerbag in Quepem, where Special Stages will be held on 24th and 25th of July and to the Green Hills Agri Farm in Maina, Quepem on 26th and 27th of July, before eventually culminating at the Rajiv Gandhi IT Habitat in Dona Paula on 28th of July.

The tracks have been laid and the participants are ready to roar; the country’s annual off-roading extravaganza hereby begins! Now, only time will tell who will be the ultimate off-roading champion of India who will represent the country at RFC 2018 Global Series Grand Finale.