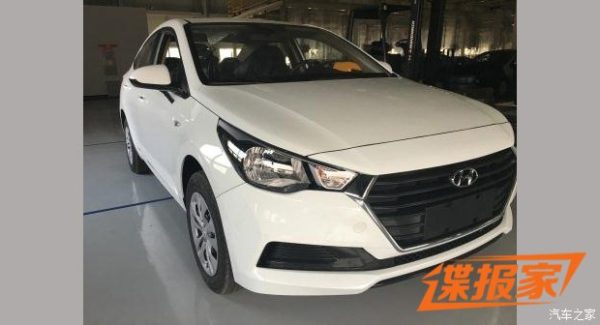 The Next Gen Verna spotted completely Undisguised in China ahead of its global launch.

Hyundai Motors India Limited (HMIL) has gained quite an amount of ground in the Indian automotive sector.

Three of its cars featured in the top 10 most sold cars across segments in the month of June 2016. The company though seems extremely adamant on making further in-roads.

Basing upon this very ideology, the Korean auto manufacturer has some serious launches lined up for the coming months.

First-up would be the next-gen Elantra Verna which is going to play in a segment which has seen contraction thanks to the SUV boom, then up next is the new Tucson which is going to ride further on the success of Creta and then the Verna which was an briefly the leader of its segment before stiff competition dethroned it from that luxury.

Hyundai had earlier this year displayed this very same vehicle as a concept car at the Beijing Motor Show. The vehicle was spotted completely undisguised in China recently and it retains most of the design elements from the Prototype.

The highly futuristic Fluidic 2.0 design language is was very much visible throughout the car and to be frank it does look impressive. In fact, the front end looks a tad similar to its bigger sibling, the Elantra which is an added advantage and also reminds one of the Elite i20.

The Next Gen Hyundai Verna is supposedly bigger than its predecessor in terms of overall length, wheelbase and width. This would directly mean a larger passenger cabin to accommodate people and increased boot space. The vehicle though is apparently shorter in height in order to give it the sportier edge mimicking a coupe styling.

The engine line up though hasn’t be finalized yet for the Indian market but in all likeliness the current line-up would be retained which includes 1.4 and 1.6 petrol & diesel engine options. Transmission will be 5 & 6 speed manual in addition to automatics in both petrol & diesel.

The global debut is scheduled before the end of this year in China and mostly will make it to Indian waters by early next year.

The Next Gen Verna will form the ideal platform for the next Gen i20 which could be introduced in year or 2 as both the Verna and i20 share the same platform.

Now you can buy a Hyundai car seating at home via Hyundai Online Car Booking. Hyundai Motor India Ltd (HMIL), have opened the Online booking for its range of cars for ease of customers across […]

Hyundai India, the second largest car maker has introduced a limited of the Elite i20 named as Elite i20 celebration edition. The Elite i20 has been one of the best-selling premium hatchback in the Indian […]