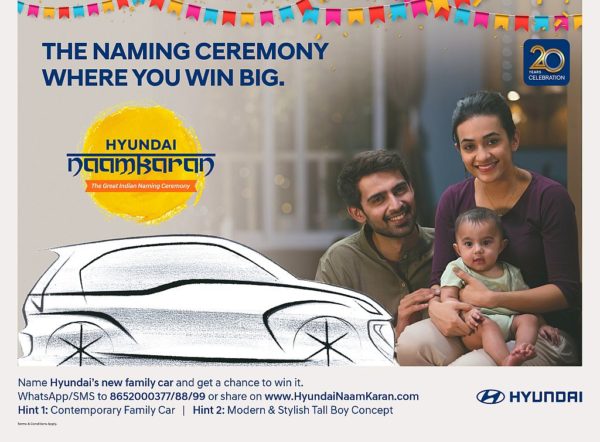 Hyundai Motor India Ltd. (HMIL) had initiated a Mega Naming Campaign – ‘Naamkaran’ for its most awaited Contemporary Family Car code named AH2. The Naamkaran campaign which was began on 16th August 2018 received an overwhelming response of over 4 lakh votes till date. Participants can suggest their names for their favourite car through the Website, WhatsApp & SMS. The lucky winner would win the new car at the launch ceremony. While Santro has emerged as the favourite name with over 2 lakh votes, it is followed by other interesting names like i5, Splash and Saneon to name a few. The Naamkaran campaign will end on 25th September 2018.

The Global Debut of the Contemporary Family Car is scheduled on October 23, 2018. This new hatch from the Hyundai stable will be a replacement for its earlier Santro which was a favourite among hatchback buyers in India. The new car will retain its tall-boy stance but will be larger in dimensions, thus ensuring a bigger cabin and bigger boot. It will also get a modern and well appointed cabin just like all other Hyundai cars in the market. The AH2 will compete with the likes of Maruti WagonR and Tata Tiago.

Hyundai Elite i20 with automatic transmission launched at Rs.7.04 Lakh

Hyundai Motor India Limited announced the launch of CVT option in the 2018 Elite i20 at a starting price of Rs.7.04 Lakh (GST Ex-Showroom Price Delhi). The new 2018 ELITE i20 comes with premium interiors, highly advanced features, […]

Hyundai Motor India unveiled the design expressions of upcoming new Global SUV – All New Tucson. Tucson is a native American name which portrays an image of a ‘Strong Sun’ lending a premium character with […]