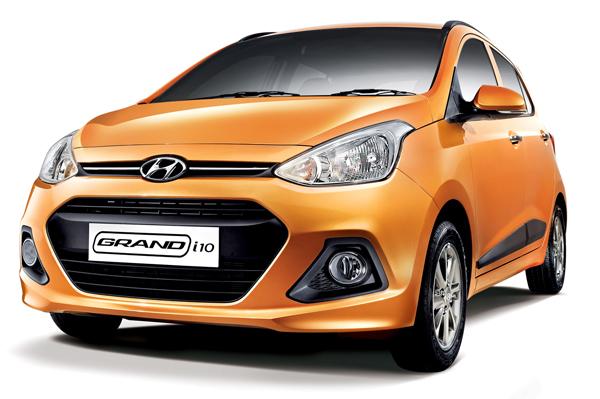 Hyundai India just revealed its all new small car for the Indian market a few days back. The South Korean car maker will launch the all new Grand i10 on the 3rd of September in the Capital city. Based on the all new i10, the new small car will be slotted between the current i10 and i20. The South Korean car maker which is eying at the one number position for many years is now getting very serious.

Hyundai has been refreshing its product line-up at a faster pace as compared to its competitors. The company is betting on a number of products which will be introduced in the next two three years to achieve its goal of being number player in India.

The Grand i10 will be introduced in two engine options: 1.2 kappa and 1.1 CRDI diesel engine. The car will be available in four trims: Magna, Sports, Asta and Asta (O). Automatic option will be available on the petrol engine only.

On the pricing front, we could expect aggressive pricing from Hyundai with the petrol variants starting at Rs. 4-4.2 lakhs and diesel just under Rs. 4 lakhs atleast initially.

The launch of the new car will happen just before Ganesh Chaturti season which could help the car maker add more volumes. Last month the company reported a marginal drop in sales.

The Grand i10 will directly compete with the Maruti Suzuki Ritz & Swift, Honda Brio and Chevrolet Sail hatch.

Hyundai India launched the new gen Verna sedan in the Indian market at a starting price of Rs. 799,900 (ex-showroom Delhi). The new gen Hyundai Verna 2017 is built on the new K2 platform which […]

Hyundai creates a new benchmark with new Elantra to take on the Toyota Corolla Altis. Hyundai Motor India introduced the New 6th Generation Elantra in the Indian market. The executive sedan which has sold over […]

Ahead of its launch in August the new Gen i20 has been spotted completely undisguised on the Indian streets. After spotting the several times in the disguised avatar we get to see the production ready […]