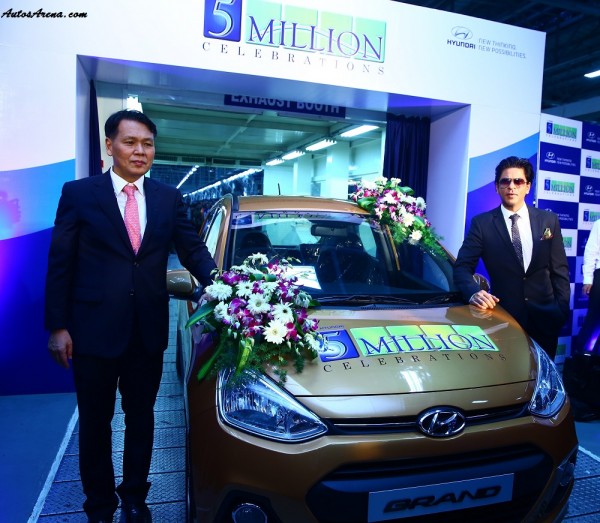 A journey started 15 years back for the South Korean car maker Hyundai, has now crossed a new milestone. The company which is the second largest car maker in India has announced the production of the 5 Millionth car at its manufacturing unit in Irrungattukottai, near Chennai. Hyundai entered the Indian market in 1998 with the launch of Santro and now boasts a product range of more than 10 cars  with 5 small cars: Santro, Eon, i10, Grand i10 and i20.

The occasion was graced by Bollywood actor Sharukh Khan who is the brand ambassador for Hyundai since the company made its entry in the Indian market. Hyundai and Shahrukh Khan’s association has been one of the longest brand ambassador associations in India.

Hyundai Motor India has a production capacity of 6.8 lakh cars and the bulk of cars are exported which also makes the company the largest exporter in India. The company has a 46% export market share and 20.3% in the passenger car segment. 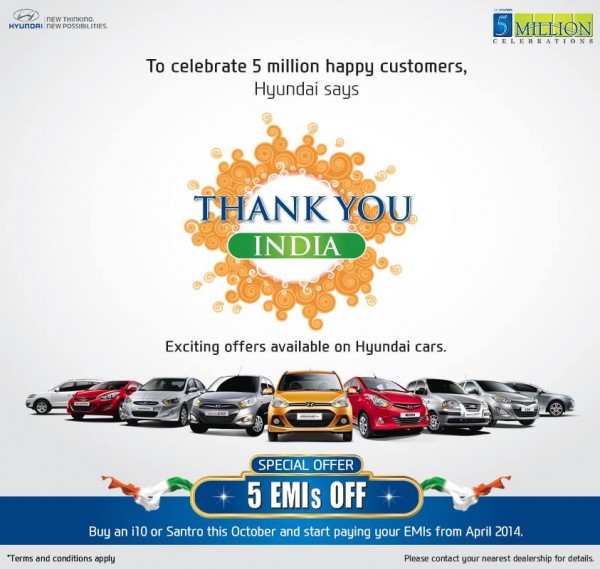 With the 5 Million Car Roll-Out, Hyundai also celebrates 15 years of excellence in India. The special offer includes 5 EMIs off if you buy a Santro or i10 this October. Which means you start paying your EMIs from April 2014. For more details visit your nearest dealership.

Hyundai New Gen VERNA in India has received more than 15,000 Bookings and more than 124,000 inquiries in just 40 days of its launch in India. The Verna also became the highest selling sedan in […]

‘Happy Move – Save Our Heritage’ campaign by Hyundai

As a part of its CSR program, Hyundai Motor India Ltd (HMIL) launched the 3rd phase of Happy Move – Save Our Heritage campaign. Through this campaign, Hyundai aims to educate and sensitize people about India’s […]