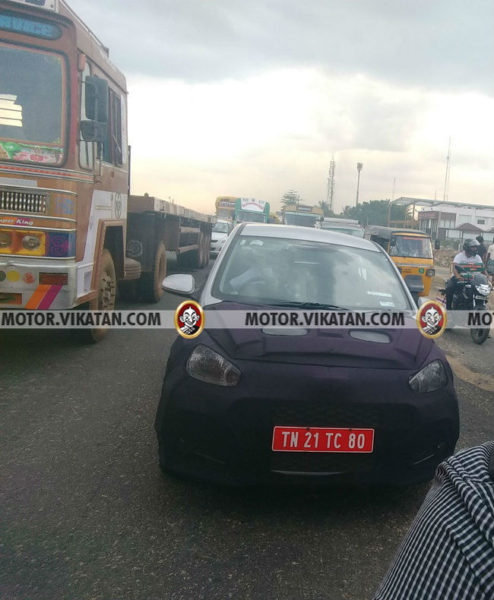 Hyundai prepares Grand i10 facelift to take on the new Swift launch in 2017.

South Korean automaker, Hyundai has been working hard to increase its market share. The company which has been concentrating on premium products is also silently working on the bread and butter models like the Grand i10, Eon and new Santro.

The company has started work on the Grand i10 facelift and the car was caught testing in Chennai. The spy pics reveal the cars front, side and rear all in cameoflauge which indicate the minor changes the hatch will undergo.

The  Grand i10 facelift will get minor tweaks like new detailing in headlamp & tailamp, revised grile with hexagonal design mesh, new set of alloy wheels and new color options. Inside the Grand i10 could carry the dual tone interiors offered on the Anniversary edition and 6.2” Touch Screen Audio-Video system from Blaupunkt.

We cant expect major changes in terms of equipment, but Hyundai may offer Airbags and ABS across all variants.

Engine options will be same which includes 1.2 kappa and 1.1 CRDI diesel engine. Transmission options include 5 speed manual and 4 speed automatic gearbox on the 1.2 petrol engine option.

Grand i10 facelift changes will also be carried to the Xcent sedan which shares everything except the stubby boot.

The Grand i10 has moved up the ladder and now starts at Rs. 4.5 lakhs mark. The new Swift too will be priced in a similar bracket but will be featured packed to regain its lost position due to aging factor. The compact hatch segment has now been further divided into compact and premium compact the later which has models like the Baleno, Elite i20 and Jazz.

Hyundai Motor India has introduced a special edition of the compact sedan Xcent, commemorating 20 years of Foundation in India. The South Korean car maker completed 2 decades in the Indian market and is now […]

New Hyundai Elantra to expand Hyundai’s premium offering in India. Ahead of the launch of its executive sedan the all-new Hyundai Elantra next month, some Hyundai dealers have started accepting bookings for the car at […]

Hyundai India has started teasing the new generation Verna Sedan on the company website. The automaker has also launched a micro site where prospective customers can login and submit details to be contacted when the […]