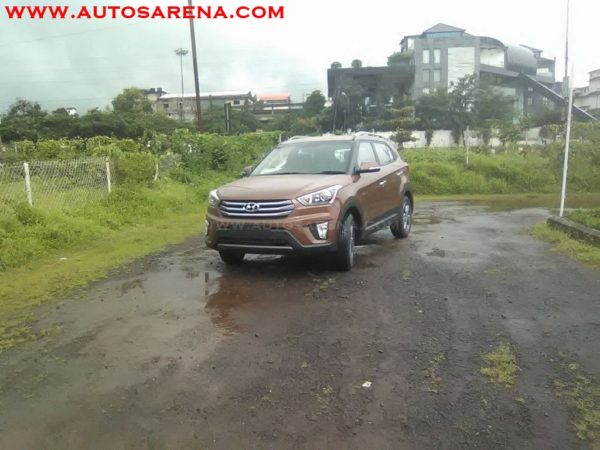 Hyundai Creta was introduced in a new color share – Earth Brown recently when the company launched the Creta Anniversary Edition. We have snapped the Creta Earth Brown at a dealership.

The company also introduced a new Executive variant (E+)  in 1.6L petrol which is priced at 9.99 lakhs.

India’s most loved Made in India SUV has met aspirations and brought smiles to over 125,000 happy customers worldwide within a year of its launch.

Launched in July 2015, Creta has received an overwhelming response from its customers winning 27 awards including the Indian Car of the Year 2016 and about 80,000 units have been sold.

Hyundai has just launched the Elantra sedan in the Indian market and will add the Tucson SUV in October.

Hyundai Motor India Limited (HMIL) today announced the milestone of its most loved SUV – Creta crossing an unprecedented sales mark of 5 lakh units worldwide since its launch in 2015. Commenting on this achievement, […]

Hyundai Creta Automatic now available in 2 diesel and 1 Petrol option. Hyundai seems to be betting hard on the Creta and has introduced a lower version Creta S+ Automatic with diesel engine option. When […]