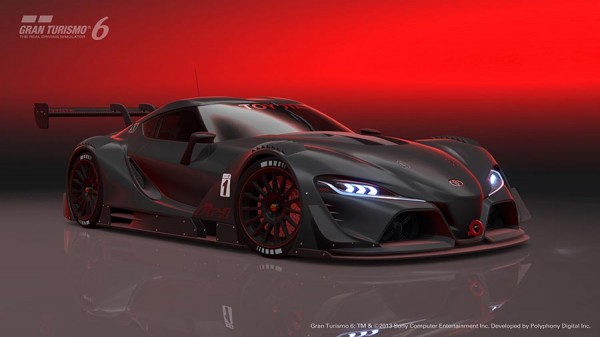 Toyota have released images of the concept FT-1 sports coupe Gran Turismo that will be exclusively rendered for and able to be driven in “Gran Turismo®6” on the Play Station®3.

Toyota’s FT-1 sports coupe concept raised a storm of approval when it first appeared “in the metal” at this year’s Detroit motor show and then went on to prove its performance in the virtual speed world of the Gran Turismo 6 PlayStation® computer game.

Now the car’s designers at Toyota’s CALTY studio in California have gone even further to produce a pure-bred racing version to add to the thrill of the more hard-core Vision Gran Turismo.

The FT-1’s basic shape and architecture lend themselves to the addition of extra cooling and downforce elements to develop the car into its Vision guise, using a design process CALTY dubs “function sculpting”.

Vision Gran Turismo names a new collaboration project, in which world leading car manufacturers and brands are participating with their concept vehicles.