Honda Cars India Ltd. unveiled the all-new 4th Generation Honda City at a World Premiere event in India. The new City will be offered with a host of new features and also marks the introduction of 1.5L i-DTEC diesel engine. Scheduled to be launched in January 2014, the pre-launch bookings of the model have begun across the country.

The all-new City has been developed at Honda’s R&D centre located in Tochigi, Japan. The car has been developed after following an extensive market surveys in India, ASEAN countries and other markets for understanding people’s driving needs and lifestyles.  The new City adopts Honda’s new ‘global operation reform’ of concurrent development and implementation of locally optimized design drawings to realize the best vehicle specifications with speed, affordability and low CO2 emissions for our customers.

The City has been a crucial car for Honda in the Indian market and has been chosen to lead the global production for the diesel city which will be equipped with a 1.5L i-DTEC diesel engine which is already gaining popularity in the country strapped on the Amaze. 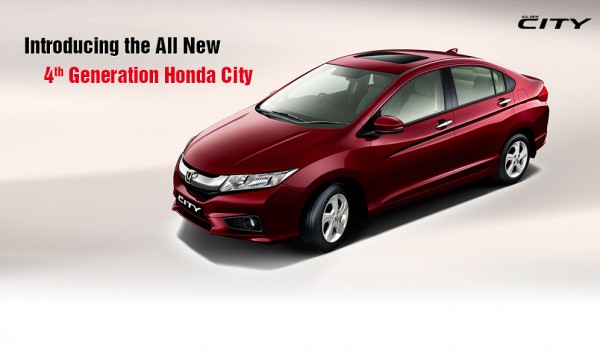 Indian will be the first country to manufacture and sell the All New City, which will eventually be sold in 60 markets to help expand Honda’s footprint in some of the fastest growing auto markets in the world.

The car is designed around the grand concept for sedan impressing the whole world by being an Advanced Cool Stunner. “Stunner” is at the core of this concept and reflects sophistication and vigor while in motion and a striking presence when standing still. The development concept focused on three aspects: Advanced Sporty Design, Best Comfort and Best Fuel Efficiency.

The City will be firat car in India to adopt Honda’s new design concept “Exciting H Design” which boasts of a Solid Wing Face, Well Toned Athlete Form body and Finely Honed Surfacing on the exterior. The new Sleek Cross-motion form exterior styling combine’s conventional sedan and elegant Coupe Styling to give the car a sporty look along the side profile.

The interior offers oodles of space and is continues to follow Honda’s “man maximum machine minimum” concept. The All New City measures 4440 mm in length (same as its predecessor), 1695 mm in width (same as outgoing model), 1495 mm in height (10 mm more than the outgoing model) and 2600 mm as the wheelbase (extended by an additional 50 mm over outgoing model). The centre console is sophisticated and futuristic with Layered Floating Cockpit design.

The car will be powered by a improved 1.5L 4 cylinder SOHC i-VTEC petrol engine offering a mix of performance and fuel efficiency. The 1.5L 4 cylinder DOHC i-DTEC diesel engine will make its debut on the City and will certainly help to regain the number one pole which the car lost to the Hyundai Verna.

Honda Motorcycle & Scooter India. (HMSI) has rolled out the latest television commercial (TVC) for exciting 4th Gen upgrade of Activa 4G – India’s No. 1 selling 2wheeler brand. The TVC was launched with the […]