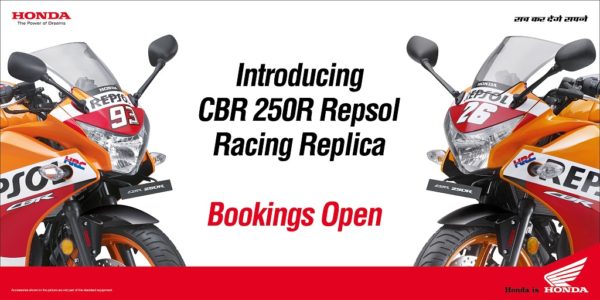 The new edition of the will be available in two different versions: Marc Márquez 93 and Dani Pedrosa 26.

The bookings can be made at any of the Honda Exclusive Authorised Dealerships across India.

Inspired by the legendary RC213V itself the new ‘Racing Replica Limited Edition’ sports an all new paint scheme with MotoGP graphics signifying the legacy of Marc Márquez(93) and Dani Pedrosa(26).

The 2016 season of the MotoGP has been extremely successful for the Repsol Honda Team with Marc Márquez securing 12 podiums finishes and 5 pole positions.

Honda Motorcycle & Scooter India (HMSI) introduced Activa 4G. The fourth generation upgrade includes a BSIV compliance engine and new features to up the quotient of the Activa 4G. The Activa 4G gets a new […]

The company achieved this milestone in just 9 months of its launch. Honda Motorcycle & Scooter India (HMSI) celebrated the new milestone selling 1 lakh of its special offering in the 125cc segment- Honda CB […]