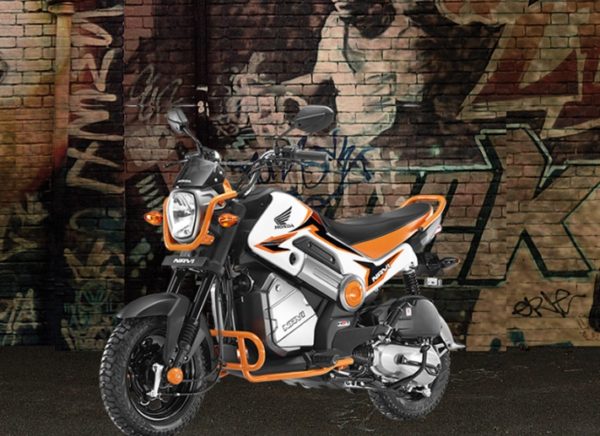 Honda’s cute little offering the Navi is now available in 10 cities and has crossed a milestone of 5000 booking so far. The number is decent considering the Navi is on sale in limited cities at time of launch. One can also pre-book the Navi in all states.

The Navi is now available in Delhi, Gurgaon, Bangalore, Mumbai, Pune, Chennai, Ahmedabad, Chandigarh, Hyderabad, and Indore. Honda will soon make it available in other Indian cities as well.

The Honda Navi was unveiled at the 2016 Auto Expo and was launched a few months later. The Navi is a very interesting concept and will certainly catch fancy of college going students.

The Navi is inspired from a Honda model Grom and manufactured in Honda’s Gujarat plant. The Navi has been engineered and developed in India and will also be exported to other countries.

Power is derived from a 110cc engine which also does duty on the Activa and churns out a a maximum power out of 7.8bhp and 8.96Nm of torque. The Navi is priced at Rs. 43,000 on-road in Delhi and the company has launched a special app to book, and explore the Navi.

For those who like to be apart from the crowd there is also a customise option.

Some of the key features include

Will Navi be able to create a niche segment for itself and re-introduce the a new fun and modern moped era?

Showcase your customised NAVI and win prises worth Rs. 2 lakhs. Honda NAVi Customania contest is a crowd-sourced online and offline event inviting the owners of the Honda NAVi to customise their own bike and […]