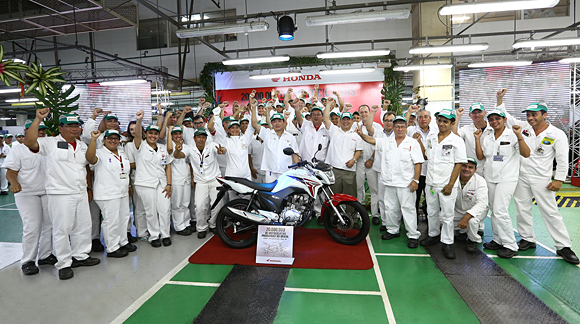 The 20 millionth unit produced by HDA was a CG150 TITAN, a new model just introduced on August 1 2014. The CG Series has been a series of motorcycle products that represents Honda in Brazil, with cumulative sales of more than 10 million units since its first introduction in Brazil in 1976.

In 2009, HDA began sales of the CG150 TITAN MIX, which was the world’s first motorcycle model equipped with environmentally-responsible flex-fuel technology. Through its efforts to develop and supply products desired by local customers, HDA achieved sales of 1.22 million units in 2013, accounting for 80% of the industry-wide motorcycle sales in Brazil.

The all-new CG150 TITAN became the first model in the small-sized motorcycle category1 in Brazil to feature CBS (Combined Brake System for front and rear wheels) as standard equipment, which enables stable braking and stopping. By installing CBS to a popular model in a category that accounts for approximately 80% of the overall motorcycle market in Brazil, Honda strives to realize the wider application of safety technology in Brazil.

Honda Motorcycle Scooter India is working on the new Unicorn 150/160 and has filed for the patent design. The company has set an ambitious target to become India’s number one two wheeler player and is […]

Honda Motorcycle & Scooter India (HMSI) announced its line-up for the Auto Expo. HMSI has moved up to the second position and has some exciting products to be displayed. The theme of Honda’s pavilion at […]