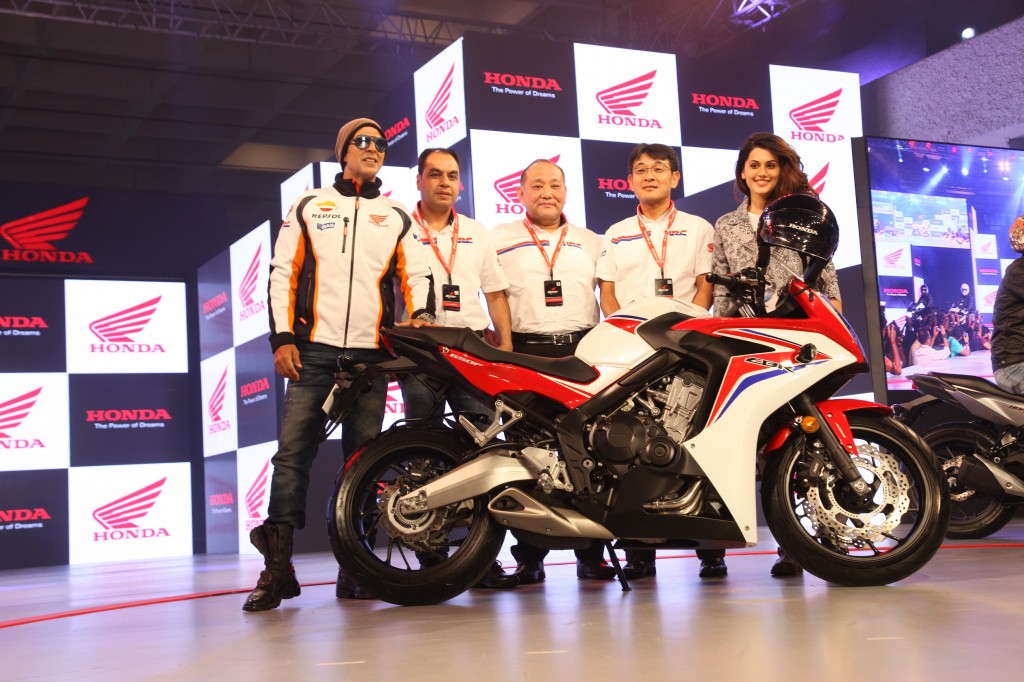 Honda fulfilled its commitment of launching 15 new models in the Indian market with the 5 new motorcycles and also revealed the first look of mystery motorcycle, developed as a stylish bike for young professionals and will most likely be placed in the 125cc segment.

The biggest launch was the all new Made in India flagship CBR 650F premium sports tourer motorcycle. The company showcased the concept at the 2014 Expo and had announced the launch at the time of unveiling.

The CBR 650F is powered by 650cc, 16 valve in-line 4 cylinder DOHC engine which develops max power of 63.6kW (87PS), and torque of 62.9Nm. Safety feature ABS is offered as a standard fitment. The bike is priced at Rs. 760,970 (Ex-showroom, Mumbai) and will be available in exclusive sales-service shop-in-shop network of ‘Wing World’ dealerships across 12 cities.

The next big launch was the new CB Hornet 160R, a sporty commuter motorcycle in the 150cc plus segment. The Hornet brand has made its entry in India and will be officially launched soon. The new 160 is most likely to replace the CB Trigger and comes features like dynamic mass forward design, tough & sharp shape with position lamps, LCD digital meter, new wave disc with CBS, wide rear tyre and short edgy tail with “X” shaped LED.

The updated CBR 150R & CBR 250R were also showcased at the event. The bikes come with Sporty graphics and new colors to redefine cult biking in a thrilling new avatar.

Honda has also partnered with Grotto S.p.A. designs which produces and distributes collections of clothing, footwear and accessories under GAS brand. GAS Which has an association with Honda MotoGP showcased its Autumn/Winter 2015-16 collection at the Revfest platform in 3 cities (Delhi, Mumbai & Bangalore) through a slick fashion-show.

Honda along with GAS plans to launch limited edition of GAS- Honda motor-biking clothing & accessories in the future at Honda Wing worlds for retail.

Click here to read more about Honda’s association with GAS

The Honda RevFest 2015 a first of its kind event by any manufacturer in India was held simultaneously across 8 centers – New Delhi, Mumbai, Bangalore, Hyderabad, Chennai, Kolkata, Indore and Ahmedabad has created huge frenzy among motorcycle enthusiasts all over the country. With 7.7 lakh plus page views, more than 25000 lucky participants had registered to be a part of this event. While another 10 million viewers tuned in through the webcast witnessed history unfold at the Honda RevFest 2015.