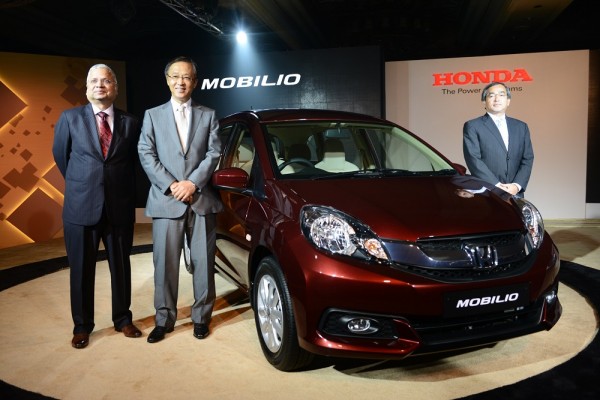 Honda has entered the MPV segment in India with the launch of the new Mobilio 7 seater MPV. Honda is positioning the MPV as a mid-size stylish 7-seater slotted between the segment leader Toyota Innova and the Maruti Suzuki Ertiga.

The Mobilio has been developed at Honda R&D Asia Pacific Co., Ltd. located in Bangkok, Thailand following extensive market surveys in India on people’s driving needs and lifestyles. The MPV is based on the Brio platform which is also shared with the Amaze compact sedan.

The Mobilio’s performance is achieved by 1.5L i-DTEC diesel and 1.5L i-VTEC petrol engines same as those offered on the City sedan. To keep costs competitive, Honda has maintained localisation level of more than 90% and Mobilio will made at the companies facility in Greater Noida, U.P.

The Amaze and City have helped Honda post high sales with a growth of 83% in the previous financial year. The company has reached the third position in terms of sales in June trailing Hyundai and Maruti Suzuki. Honda hopes the MPV too will help boost sales further and has gathered a good number of bookings.

The exterior design is based on the Dual-Solid Motion concept incorporating a sporty stance. Viewed from the front the MPV looks like a grown up Brio/Amaze except the large front chrome grille. The front body structure of the Mobilio is equipped with Pedestrian injury mitigation technology designed to absorb impact energy.  The Mobilio looks a lot modern at the rear with the rear chiseled combi lamps and belt line that drops down from the middle pillar.

On the inside, Honda has maintained the design philosophy of “Man Maximum, Machine Minimum”. The cabin is very roomy compared and beige interiors help to further strengthen large space. The dashboard is a straight lift from the Amaze. The lower variants come with black dashboard while the top V variant is available with a two-tone color scheme. The 2nd Row seat is a 60:40 split fold-and-tumble type with slide & recline option so that customer can adjust the space as per his requirement.

The 3rd row seat is a 50:50 spilt folding type which can be reclined for extra comfort. Once fold flat, it can be quickly and conveniently tumbled forward to maximize the cargo space.  Entry and exit for the third row is very convenient due to the newly-designed door line and the one-motion fold-down function of the second-row seat. The base cargo area for Mobilio is a generous 223 L which can be enhanced to 521L in the 3rd row fold configuration. 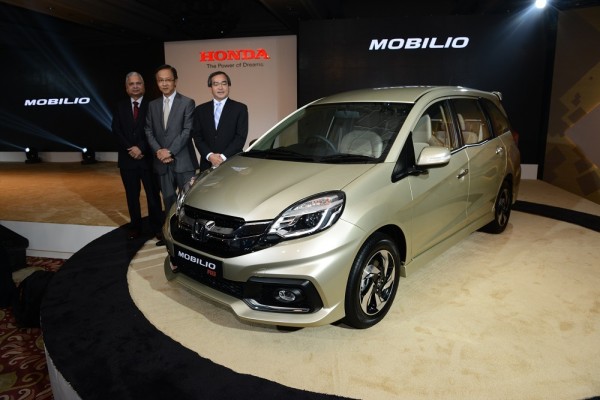 In order to appeal to younger audience who look for distinct styling along with comfort of a spacious MPV, the Mobilio will also be available in an exclusive sporty RS variant which has bolder and sportier exterior design than base grade. The deliveries for the Mobilio RS would begin from September 2014.

The Mobilio is available in 3 grades offered in Petrol and Diesel variants – E, S and V with Manual Transmission. The sportier Mobilio RS grade will be available in Diesel only.

Honda has launched the 2017 Mobilio facelift in Indonesia. The Mobilio has received its second major update since launch. The MPV first received new interiors and now Honda has done major changes to the sheet […]