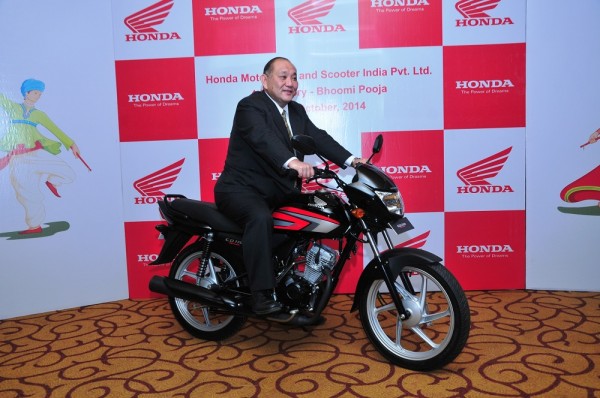 Spread across 250 acres, Honda’s fourth 2Wheeler plant at Vithalapur is approximately 80 km from Ahmedabad city. Once operational by end of 2015, it will have an annual production capacity of 1.2 million units, making it the world’s largest only scooter manufacturing facility.

Elaborating how the upcoming 4th plant is a significant milestone in Honda’s global business, Mr. Noriaki Abe, Chief Operating Officer, Honda Motor Company Ltd- Asia & Oceania Region, said, “As the World’s biggest two-wheeler market, India is already a priority market for Honda. In the current fiscal 2014-15, Honda aims to sell 18.2 million two-wheelers worldwide and for the first time, India will contribute almost 25% to global Honda sales. We have huge expectations from this project as this will be our flagship and benchmark plant in India in terms of volume, safety, quality, cost, associate skill and moral. ”

Sharing details of Honda’s fourth plant, Mr. Yoshiyuki Matsumoto, Managing Officer – Honda Motor Co. Ltd., said, “I would like to thank the Gujarat Government for their support in setting up the plant. With the fourth plant, we aim to reach closer to the vast market in West which contributes over 25% to Honda business. The new plant will employ approximately 3000 people within first 2 years of commercial production and will entail INR 1,100 crores investment. Honda’s fourth plant 1.2 million units annual production capacity and increase our overall production capacity to 5.8 million units.”

Speaking on the occasion, Mr. Keita Muramatsu-President & CEO, Honda Motorcycle & Scooter India, said, “Indian automatic scooter market is growing at 2.5 times the speed of overall 2wheeler industry growth. The latent demand of automatic scooter is so strong that with improving infrastructure in rural India, we foresee that this segment sale can go up to 35% of overall two-wheeler sales in 5-10 year horizon. As we gear up to take up this challenge of meeting the customer demand, Gujarat will an ideal home and a springboard to achieve greater heights. Now, the Honda automatic scooter you ride will not only be “Made in India” but also “Made in Gujarat.”

Outlining Honda’s contribution to ushering in local development, Mr. Harbhajan Singh – Vice President, General & Corporate Affairs, HMSI said ,”With the establishment of upcoming fourth plant, Honda is accelerating development in the Ahmedabad district and empowering local population to emerge as main beneficiaries of this growth story. As an extension of its global corporate philosophy, Honda has already started engaging with the local community with several CSR initiatives like installing solar powered hub light at Vithalapur Village to lighten community areas like chopal and local recreation centre to name a few.”