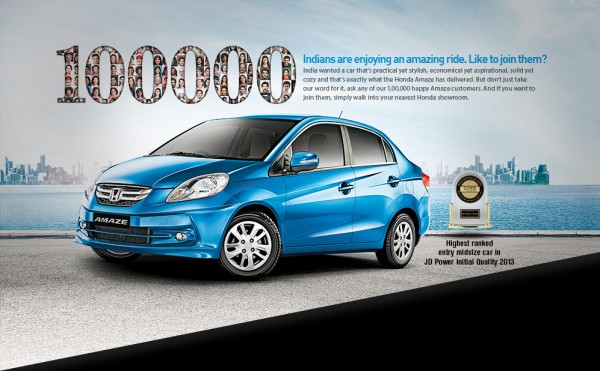 Honda Cars India have crossed a the amazing milestone of 1 lakhs sales in a record time of just 16 months since the launch of the Amaze compact sedan in the Indian market. The Amaze launched in April 2013 started the diesel revolution for Honda with the launch of 1.5 i-Dtec diesel engine. The Amaze averages 6,000 units per month making it the second best seller after the Maruti Suzuki Dzire.

Ever since Honda introduced the Amaze the company has been a star performer and witnessed great success in the Indian market. The Honda Amaze was declared as the “Car of the Year” and “Compact Sedan of the Year” by leading automobile magazines and has clinched 12 major automobile awards in 2013 – 14.

The revolutionary 1.5L i-DTEC diesel engine and 1.2L i-VTEC petrol engine, on the Amaze continues to be a perfect package which embodies the best of Honda’s technologies to deliver fun, agile and effortless driving, fuel-efficiency, spaciousness & safety. The car’s best in class fuel economy along with a host of features has made the Honda Amaze a hit in the metros, mini-metros and tier-2 and tier-3 markets.

The compact sedan segment has been witnessing competition with the launch of Hyundai Xcent and soon to be launched Tata Motors Zest.