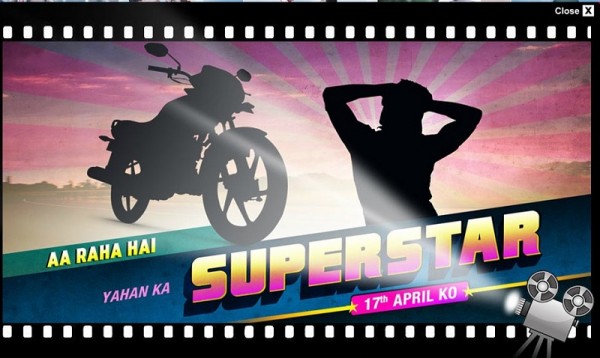 Honda 2 Wheelers India will launch a new motorcycle tomorrow and have invited us to attend the launch. There are no details shared as to which motorcycle is going to be launched but we are expecting a sporty variant of the Dream Yuga to be launched.

Honda has teased the upcoming bike on its Indian website: www.honda2wheelersindia.com with a message “AA RAHA HAI YAHAN KA SUPERSTAR”.

Honda which launched the Dream Yuga has managed to increase its market share and has already overtaken Bajaj Auto. The new variant of the Dream Yuga could be offered with a five speed gear box and may also get an optional disk brake. Another important feature on offer could be a digital instrument console which will be the bike an upmarket feel. We are only expecting the above features to most likely make it.

Honda has announced to launch a new product every quarter in the Indian market and hopes to regain the number spot by 2016. The company is also planning to open a plant in Karnataka which will to increase capacity by 1 million units.

For a country obsessed with mileage, Honda too is going the Maruti Suzuki way. The company has released a pre-launch ad which talks only about the car’s fuel efficiency. The new City will be the second […]

Honda Activa is the largest two wheeler brand sold in the Indian, surpassing Hero MotoCorp Splendor which held this title for many years. Honda Motorcycle & Scooter India has registered the highest growth in the […]