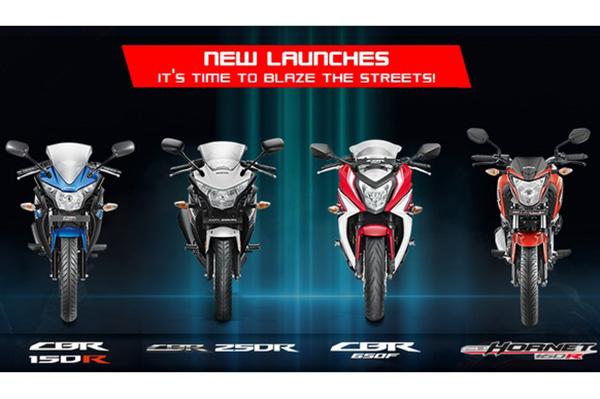 Honda Motorcycle Scooter India will launch 4 motorcycles on the 4th of August. 2 brand new models and 2 refreshed models will be introduced.

Honda for the first time will launch a high performance made in India superbike the CBR 650F . The near production concept motorcycle was first shown at the 2014 Auto expo and company has maintained their commitment for the second largest 2 wheeler market.

The Honda CBR 650F is equipped with a 649cc, four-stroke, in-line four, DOHC engine which produces 87PS at 11,000rpm and max torque 63 Nm at 8,000rpm. The motor is mated to a 6 speed transmission. The new Honda CBR 650F is expected to carry a sticker price around Rs. 7 to 8 lakh (ex showroom Delhi). The Honda CBR 650F will be sold only its exclusive sales-service shop-in-shop network of elite ‘Wing World’ dealerships across 13 cities.

The other new bike is the recently spied CB Hornet 160R which is mostly likely to replace the CB Trigger 160. Honda may also consider a full fairing version if the CB Hornet 160R sells in high numbers.

HMSI will also launch the updated CBR 250R and CBR 150R in India. Unlike the Thai market where the CBR series gets twin headlights, Indian versions will continue to be offered no changes except for some new color potions and tweaking made to the engine. Prices could be hiked by a small %.

Honda Revfest 2015 will help the company to strengthen its brand image in the performance segment and also attract many customers from competition.