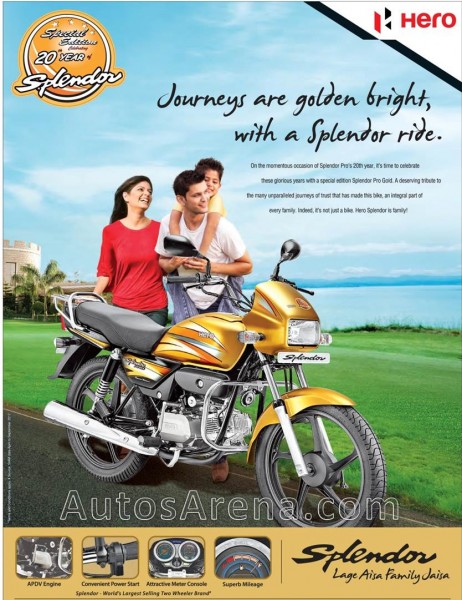 India’s largest two wheeler maker, Hero MotoCorp introduced a special edition Splendor Pro to celebrate 20 years of the brand since its launch in the Indian market.

The special edition Splendor Pro is available in golden colour and comes with no additional features or specific changes as such expect for a 20 year special edition sticker on the front fairing. The motorcycle is equipped with APDV 97cc engine and develops a max power of 7.8 Ps @ 7500 rpm and max torque of 8.04 N-m @ 4500 rpm.

The Splendor Pro comes with Kick start / Self start, Alloy wheels and a slightly better looking instrument console as compared to the Splendor Plus. The Splendor Pro is available in four variants: Kick Spoke, Kick Cast, Self Spoke and Self Cast.

The Splendor was the first motorcycle in India to be available with four-stroke technology.

1994 : Marks the journey of the Splendor in India. Hero Honda (now Hero MotoCorp launches an all new model)

2003: The motorcycle emerged as the World’s largest selling model third time in a row

Hero launches new model Splendor + based on the same platform

2007: New Splendor NXG launched and a power start variant was introduced in 2008

2009: Hero completes 11 million production of the most trusted brand Splendor

2010: Splebdro Pro introduced and the same year also saw the launch of the refreshed Super Splendor

Hero MotoCorp, the world’s largest two-wheeler manufacturer, reported sales of 487,088 units for the month of January 2017, which is a substantial improvement from the December 2016 sales. The company which was hit by demonetization […]

India’s largest two-wheeler maker, Hero MotoCorp has introduced the new 2014 Edition Karizma R and Karizma ZMR. The bikes have reached the dealers across India and the company will soon announce the official launch. Bookings […]

2017 Hero Maestro Edge launch soon. Hero MotoCorp has tasted decent success with the indigenously developed products such as the Maestro Edge and Duet. The Maestro Edge which is targeted mainly towards the masculine riders […]