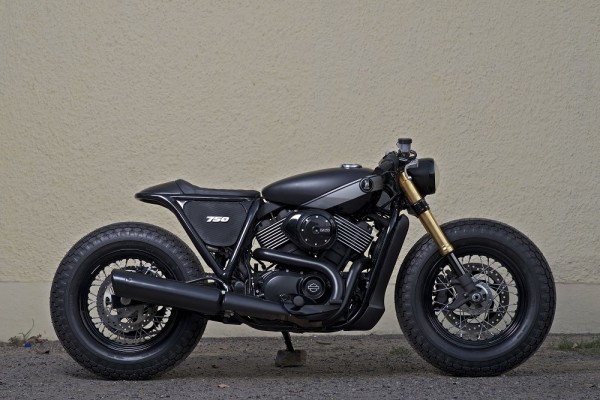 Revealed in its first phase at the Harley Rock Riders festival in Mumbai late last year, the custom Street™ 750 designed by Rajputana Customs is back with a bang. While the initial version was more an organic, old-school inspired custom version of the popular Street™ 750, motorcycle, lovers can expect to see a brand new, radically designed bike at India Bike Week on 20-21st February. This is the first-ever Harley-Davidson Street™ 750 built by an independent custom bike builder in India, and the Jaipur based custom motorcycling outfit has definitely showcased the customization capabilities of the 2015 Indian Motorcycle of the Year.

Commenting on the build, Vijay Singh of Rajputana Customs said, “Where Phase 1 of the build was all about showcasing the versatility of the Street 750 while retaining most of the stock components, Phase 2 is about taking the build a step further and really going all out with the design and making some radical changes. The new design includes a new gas tank, rear set foot pegs, a performance exhaust and a new rear cowl amongst other elements. It’s been great working on this build for Harley-Davidson, and we look forward to doing more such exciting things in the future.”

Motorcycle enthusiasts across the country are gearing up for one of the most awaited bike events of the year – India Bike Week, in scenic Goa. While you strap on your riding gear, and buff up your ride here’s the lowdown on what else can be expected from Harley-Davidson this year.

Witness the spectacular sight of thousands of roaring Harleys, ride into the India Bike Week, in the biggest ever Harley-Davidson Parade at 4:00 pm from Nazri Grounds, Baga on 21st February. Harley owners from across the country will come together to participate in the signature Parade making this the largest Harley-Davidson parade in the country till date!

The Kings of Custom

The age old metaphor – no two Harleys are the same gets new meaning at India Bike Week as we unveil 13 radically customized Harley-Davidson Street™ 750 motorcycles as part of the India Dealer Custom Contest. Festival goers will also be able to feast their eyes on a number of other customized Harley-Davidson motorcycles that are participating in the annual Harley Owner Custom contest.

Harley-Davidson India and Only Much Louder join hands to produce the biggest rock music festival in the country Rock music lovers can rejoice as Harley Rock Riders – Season V returns this year, on November […]