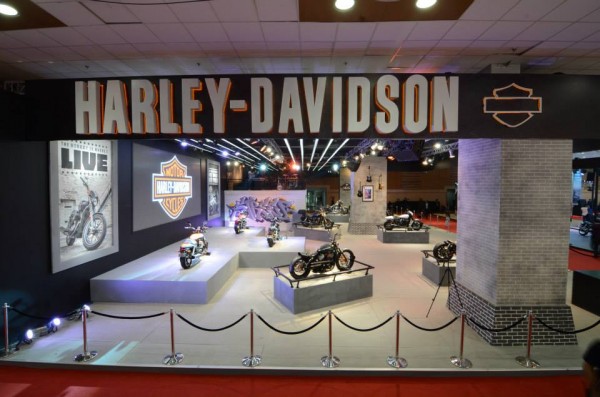 Iconic bike maker, Harley Davidson launched the all new Street motorcycle at the 2014 Auto Expo. The new offering will help the American bike maker to cater to volumes. Priced at Rs. 4.1 lakhs the Street 750 will appeal to larger base of motorcycle enthusiasts.

The new Street 750 is powered by an all new Revolution X™ V-Twin engine which is developed for urban riding. The Liquid-cooled engine is mated to a 6-speed constant mesh spur gear box which develops 65 Nm @ 4000. MRF Zappers which are designed specially for Harley Davison will be seen for the first time of the Harley’s.

The Street platform will be made in India at Harley’s assembly facility in Bawal, Haryana and also exported to select international countries. The bike is on sale in all the 13 dealers across India.

Harley Davidson also showcased the accessorized version of the Street named as the Street 750 Custom concept.

Besides the Street, the Harley Davidson stall had a lot more to offer. Harley showcased the Street Bob, Street Glide, Fatboy Special, Street concept (Rushmore project prototyes). The Street platform is going to play a vital role for Harley Davidson in emerging markets like India which will help the company not only get the volumes but also help to reach a wider base of customers.

Maruti Suzuki has announced the prices of the Celerio hatch, one of the most awaited cars at the 2014 Auto Expo. The Celerio is launced in 6 variants: LXi, LXi AMT, VXi, VXi AMT, ZXi […]