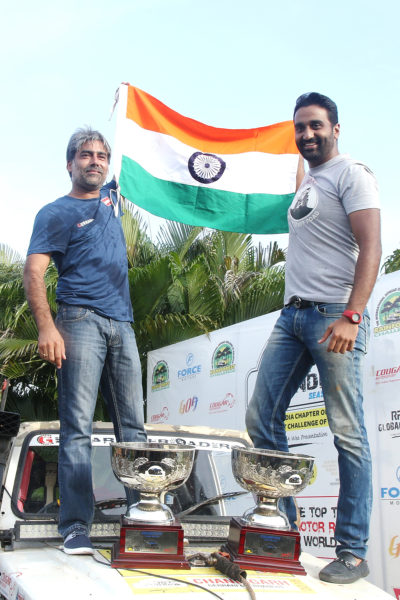 After creating history in July at Force Gurkha RFC India 2016 by becoming the first Indian duo to win the country’s toughest off-road motorsport event, Gerrari Offroaders Chandigarh’s Gurmeet Virdi and Kirpal Singh Tung are all set to hoist the Indian flag in the Malaysian soil at the 20th edition of the Rainforest Challenge (RFC) Grand Final.

To be held from 25th November to 5th December, RFC 2016 Grand Final is going to be a mega clash of the best offroaders from across the globe, as they compete for the winner’s trophy at the 2016 Edition of one of the world’s top ten toughest motor races.

RFC Grand Final is the culmination of the Global RFC Series, which has 25 editions worldwide in countries like India, Australia, Russia, China, Vietnam, Thailand, Sri Lanka, Korea, Myanmar, Ukraine, Balkans, South Europe and North Europe among others. The event was launched in India in 2014 by Delhi-based Cougar Motorsport Pvt. Ltd. and despite being only three editions old, RFC India is today proclaimed by the entire Indian off-road community as the toughest off-road motorsport event of the country.

As per RFC India format, the top Indian driver of the competition gets a free automatic entry to RFC Grand Final. Therefore, Gurmeet will be representing India at the global series’ finale this year. This is the second time that an Indian team would be competing in RFC Grand Final and it is also Gurmeet’s second attempt at this mega event.

In 2014, he was the co-driver of the first ever Indian team that participated in RFC Grand Final. This time round, Gurmeet will be competing as the driver while Tung will support him as his navigator.

As per Mr. Luis J.A. Wee, the Founder of the Rainforest Challenge, “It’s really wonderful to see our current RFC India champion making it to the mother event RFC in Malaysia. I am very sure that the skills that Gurmeet & Kirpal have displayed in Goa will be put to good use competing against the other internationals. They are also both very cool players, and such traits plus their improved driving and recovery skills will add to their advantage. So, good luck and best wishes to our Indian champion team!”

This year’s special 20th edition of RFC Grand Final will take place in Pahang, the biggest state in peninsula Malaysia and a tropical paradise for sports & adventure based tourism. The event will have twenty four Special Stages (SS) that will be divided into four progressively difficult competitive legs – the Prologue, the Predator, the Terminator and the Twilight Zone. The competition will test the competitors’ strength, endurance, driving and vehicle recovery skills under extreme off-road conditions and the team with the maximum points at the end of all the SS will be announced as the winner.

Wishing the Indian team luck for the upcoming competition, Force Motors Ltd’s Managing Director Mr. Prasan Firodia said, “Force Motors would like to wish Gurmeet and team good luck for RFC Malaysia 2016. His performance at Force Gurkha Rainforest Challenge, India has raised the bar of Indian off-roading. May he bring the Winner’s trophy back to India!”

For Gurmeet, participating in RFC Grand Final 2014 was a true test of his survival instincts and unlike anything he had experienced before. In contrast to RFC India, where the competitors had a decently-sized support team to take care of the team’s food and other requirements, in Malaysia they had to fend for themselves throughout the competition, having only a skeleton support team of 2 mechanics.

At this year’s edition, they displayed international level of skill and technique that ultimately resulted in their historic win. Since the toughness quotient of RFC India is quite high and they nailed it beautifully, I am confident that the Indian team will give a very tough competition to the other teams at the RFC Grand Final.”

With less than two months left for the fourth edition of India’s toughest and the most celebrated annual off-road motor-sport competition, the Force Gurkha RFC India, adrenaline is running high in the entire Indian off-roading […]