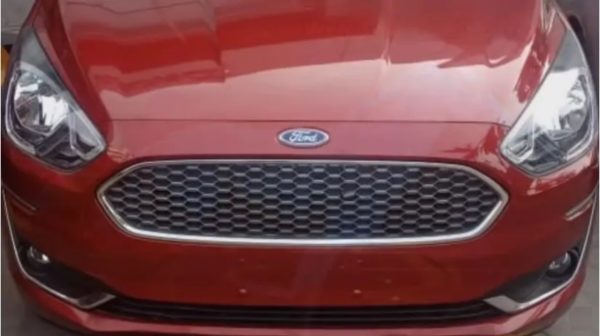 Ford India is all set to launch the Figo Aspire facelift on 4th of October.

As per our sources, the Aspire facelift will come with Boron steel which is the same as that used in the EcoSport which could increase the weight slightly but will assure the solid built feeling.

The automatic will be offered in single Titanium variant only and will be powered by the new 1.5 3 cylinder Dragon series petrol engine.

With the Indian government offering special incentives for alternative fuel vehicles, Ford too plans to cash on the same and will launch the CNG variant of the Aspire in 2019. The car will be targeted to towards the fleet buyers.

The Figo moniker will be introduced again which was removed soon after one year’s launch.

Key changes to the sedan include the new grille, new bumper design, with C-shaped chrome elements on either end with new round foglamps and a wider central air dams, new headlamp cluster with LED DRLs, and a new set of alloy wheels. Ford has missed the new trend of machined alloy wheels and may have saved it for a special edition in the future.

On the inside, the car gets the new Ford SYNC3 entertainment system borrowed from the EcoSport.

The Figo Aspire facelift is expected to be priced aggressively similar to the Ford Freestyle.