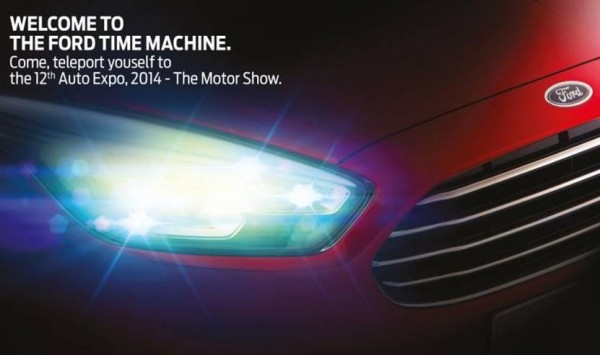 Did you want to visit the 2014 Auto Expo again? Certainly it’s a big YES by all auto enthusiasts. For those who missed the Auto Expo, Ford is giving them another chance to revisit something enormous which you missed, thanks to the Ford Time Machine.

The Ford Time Machine will be showcased in six cities over the next 15 days. Starting with Mumbai, the machine will travel in major cities like Bangalore, Lucknow, Surat, Chennai and Guwahati.

A first of its kind initiative by Ford will bring all the experience and entire line-up in these cities. At 2014 Auto Expo, Ford showcased the new Figo sedan, unveiled the facelifted Fiesta sedan & Endeavour SUV. The 2014 Figo with Wifi and new Mars colour will also be showcased.

The Ford Time Machine event will take place at the following locations:

Ford India is taking new initiatives to promote the brand. The company is steadily expanding their footprint in India and now has 304 sales & service facilities across 164 cities. The company is gearing up for their next big launch the all new Figo which will be launched in two body styles: hatchback & sedan.

Ford India will phase-out the current Figo in 2015, to make way for the all new Figo. The American car maker unveiled the new Figo sedan concept at the 2014 Auto expo and the will […]