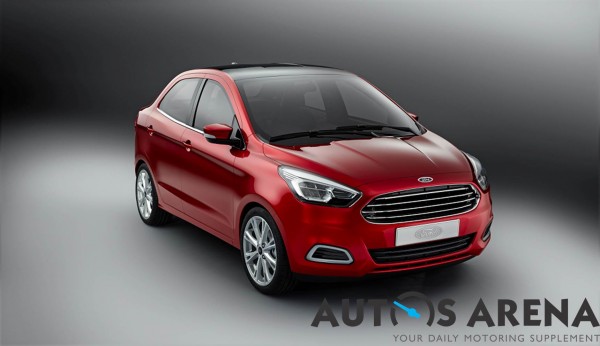 Ford India will phase-out the current Figo in 2015, to make way for the all new Figo. The American car maker unveiled the new Figo sedan concept at the 2014 Auto expo and the will launch the hatchback version by late 2015 in India. The Figo sedan version will make its entry mid-2015 and replace the ageing Ford Classic in the Indian market.

Launched in 2010, the Figo helped Ford to reach the masses and generate the much needed volumes for the company. The car sold in high numbers but has now settled to 3-3.5k units per month.

The new generation Figo will be based on the new KA global platform which has already made its debut in the Brazilian market. Ford will launch both the hatchback and sedan versions and will continue using the Figo badge for the Indian market which has been the highest selling Ford car in India after Ikon.

In terms of powertrains, we could expect the new Figo to be powered by the 1.5 TDCI diesel engine which also does duty on the EcoSport while the 1.2 petrol could be re-tuned to provide higher power and torque without compromising on fuel efficiency. The engines will be mated to a 5 speed transmission. The sedan version could be offered with an automatic option.

The new Figo platform could be made at the company’s new plant in Sanand, and the car will also be exported to a number of countries similar to the EcoSport.