Ford India did a global premiere of the Figo Sedan Concept two days earlier to the Auto Expo, but the American car maker had a lot more to showcase at the 2014 Auto Expo. Keeping true to the company’s vision of One Ford, the company showcased the next global product the Figo Sedan Concept which is going to completely change the compact sedan segment in terms of design, space and technology. The Figo Sedan will sport a premium design with first in segment safety and smart features. We got a closer look at the global unveiling on the 3rd February and can certainly say the next generation Figo will repeat the same buzz created by EcoSport. 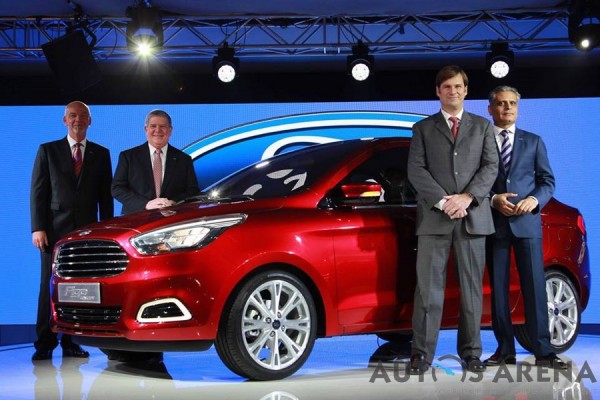 Ford unveiled the Fiesta sedan and Endeavour SUV facelift which now embodies the new Ford design language. The new fresh look will help to improve the flagging sales of Fiesta and also give the Endeavour a new life in the competitive 20 plus lakhs SUV segment.

Ford also showcased the EcoSport which helped the company to break new sales records. Other cars on display were the 2014 Figo hatch, the price cut Classic sedan which makes it a real deal. To make the overall experience more joyful and make the cars more accessible, Ford launched the Happy Pocket Service.

The stall also had a lot more fun activities and interactive displays to keep the visitors full engaged. On display was the award winning 1.0-litre EcoBoost with an arrangement featuring two air fans to simulate Forced Induction. For cricket lovers, the American car maker had set-up a virtual-reality cricket game to showcase the power & performance of the EcoBoost engine.

Tata Motors have unveiled two new products the Bolt Hatchback and the Zest compact Sedan. The two products will be launched in the second half of this year. The Zest & Bolt will showcase the […]