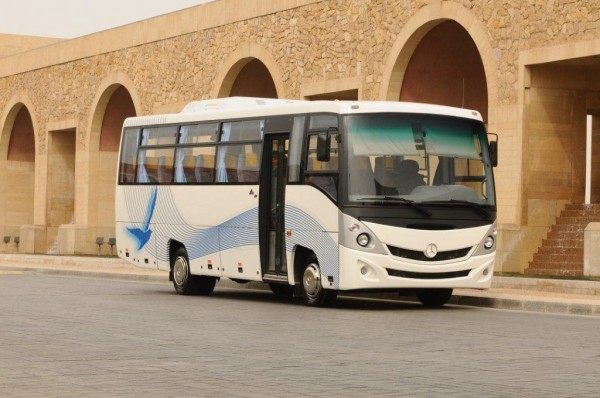 Daimler India Commercial Vehicle Pvt. Ltd. (DICV), a wholly owned subsidiary of Daimler AG, Germany, has started to export bus chassis from India. Hartmut Schick, Head of Daimler Buses, and Markus Villinger, Head of Daimler Buses India, were present at the Egyptian capital of Cairo to celebrate the delivery of the first bus chassis to the company’s long-time business partner MCV. The products in question are nine-ton bus chassis that MCV will equip with bodies in Cairo. Starting immediately, the finished vehicles will be sold as Mercedes-Benz-brand buses through MCV’s nationwide sales network.

“The export of bus chassis from India to Egypt is yet another demonstration of how we are successfully leveraging on our global presence,” said Hartmut Schick at the festive handover of the chassis. “Our global production network allows us to offer appropriate and competitive products for every market.”

To this, Karim Ghabbour, Founder & Managing Director, MCV added: “We’re convinced that the chassis from India will ensure our buses’ high quality and at the same time expand our product range with a high-performance vehicle that will be offered at attractive terms.”

The OF 9t bus chassis with front-mounted engines are manufactured at the Daimler India Commercial Vehicles (DICV) plant in the southeastern Indian city of Chennai, and delivered from there to Egypt. The bus chassis are rolled out from the same assembly line as that of BharatBenz trucks, as they are technologically similar to the medium-duty BharatBenz trucks. As a result, Daimler was able to begin with exports before the bus plant was completed at the Oragadam site.

The chassis from India are especially modified for use in buses. The chassis are competitive, high-quality products, due to their high degree of localization and their incorporation in state-of-the-art production and logistics processes. This enables Daimler Buses to offer vehicles in previously unexploited segments of the Egyptian bus market. The company plans to include additional export markets in its sales network at a later date.

Meanwhile, construction of the DICV bus plant is continuing at a rapid pace. Daimler is investing around €50 million in the project launched in March 2014. The company expects to begin producing Mercedes-Benz and BharatBenz buses at the plant at the end of the second quarter. Spread across an area of 113,000 square meters, the plant is being built within the existing premises of DICV. The plant will have an installed capacity of 1,500 vehicles per year in the initial phase, and can be expanded to 4,000 units subsequently. Once construction is completed, the facility in Oragadam will be the first Daimler plant worldwide to produce trucks, buses, and engines for a total of three brands.

Daimler India Commercial Vehicles (DICV) is a 100% subsidiary of Daimler AG, Stuttgart, Germany. DICV produces medium and heavy-duty commercial vehicles for the Indian volume market, under the brand name – BharatBenz. BharatBenz stands for Indian engineering with German DNA. The products have been engineered to serve all major customer segments, from owner-drivers up to large fleet operators. The efficiency of BharatBenz trucks is an optimal fit for customers keen on efficiency, a low Total Cost of Ownership over the life-cycle and highest profit potential for their businesses. The state-of-the-art production plant at Oragadam, near Chennai, spreads over 400 acres (160 hectares). It includes a modern test track designed to simulate Indian conditions – making it one of its kind in Asia.  DICV has a total dedicated investment of over INR 4400 crs. (approximately €700 million).

The Company also handles Production, Marketing, Sales and After Sales of Mercedes-Benz Actros Trucks in India. Mercedes-Benz Trucks with the Brand Promise “Trucks you can Trust” are renowned world-wide for their reliability and efficiency under most extreme operating conditions, as well. These trucks also offer the best that Truck Technology has to offer. The Daimler Bus division in India was merged with DICV in April 2013. In May 2013, a new range of FUSO trucks were launched as part of Daimler’s ‘Trucks Asia’ strategy. In March 2014, DICV laid the foundation stone for its upcoming Bus plant. This plant whence in completed in 2nd quarter 2015 will roll-out buses under the brands Mercedes-Benz and BharatBenz. Sustainability being a core of Daimler’s corporate culture, DICV will focus on creating efficient, reliable and ecologically friendly products.

BharatBenz is the Indian truck brand of Daimler AG, the world’s largest Commercial Vehicle manufacturer and inventor of the truck. Backed by over a century of global trucking experience and an in-depth understanding of the Indian terrain, BharatBenz is here to transform the country’s trucking industry. BharatBenz offers Indian customers an entire truck portfolio in the 9 to 49 tonne range across various applications. The name – BharatBenz – brings out the two most defining qualities of a brand that is being built exclusively for India. ‘Bharat’ carries the values, ideologies and spirit of the nation, and reinforces the brand’s commitment to serve the Indian market. ‘Benz’ upholds the lineage of innovation, technological brilliance and engineering excellence that have given unparalleled performance and great value for generations. Powered by the synergy between global leadership in technology and local deep rooted customer knowledge, BharatBenz builds robust, reliable, performance-oriented trucks to drive maximum productivity and deliver maximum value to customers across the country. With BharatBenz, a new era in Indian trucking has arrived.

DICV plant in Oragadam: Start of Production of BharatBenz and Mercedes-Benz buses

DICV to manufacture new range of BharatBenz and Mercedes-Benz buses at Oragadam plant With an investment of INR 425 cr, the bus plant has an initial capacity  of 1,500 units which can be further expanded […]