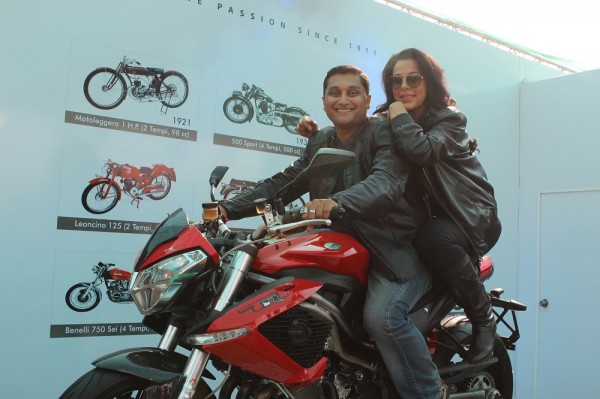 DSK Motowheels, one of India’s most established players in the superbike industry today, under their partnership with the well-known Italian biking legend – Benelli, showcased 8 legendary bikes at the India Bike Week 2015, held at Vagator, Goa on 20th and 21st of February, 2015. Mr. Shirish Kulkarni, Chairman, DSK Motowheels Pvt. Ltd. unveiled the 2015 editions of five Italian bikes that include an in-line, two cylinder TNT 300, the in-line, four-cylinder 600cc TNT 600i as well as the TNT 600 GT, the 898cc, in-line, three-cylinder TNT899 and an in-line, three-cylinder 1131cc, TNT1130. This was followed by an addition of three new superbike models that include the TNT 25, Blackster 250 and Trek Amazonas, which will be making their way to the Indian market in the future.

Mr. Shirish Kulkarni, Chairman of DSK Motowheels said “In addition to the 2015 editions of the five Italian stallions, the three new bikes showcased today will further revolutionize the Superbike industry in the country, when they make their way to the Indian market. The Indian motorcycle enthusiasts will now be able to taste the Italian marvel. We are affirmative that with our understanding and experience, along with a wide and strong dealer network and an impressive line-up of DSK Benelli superbikes, we have something for every rider.”

Born of rich, pure lineage, Benelli today boasts an impressive range of capable, globally-respected superbikes that marry heritage, innovation, styling and technological prowess. Benelli’s distinctly stylish motorcycles are known for their Italian flamboyance and the ability to provide riders from all walks of life, a pure and high-performance experience.

The Indo-Italian tie-up between DSK Motowheels and Benelli paves the way for a high-end biking experience through Benelli’s extensive bike range, giving Indian bikers their ticket into the club of thoroughbred motorcycling aristocracy. DSK Motowheels will play a pivotal role in assembling and selling Benelli bikes across the country and supporting them with a good backup of service and spares. DSK Benelli will set up exclusive dealerships across India.  To start with, the first round of dealerships will include Mumbai, Pune, Goa, Delhi, Chandigarh, Hyderabad, Bangalore, Chennai, Kolkata and Ahmedabad.

Established in 2012, DSK Motowheels, a part of the DSK Group (Diversified business group with a turnover of over Rs. 5000 crores) forayed into the growing automobile sector by entering the niche segment of powerful and aspirational bikes.

With a CKD plant in Maharashtra, the brand enjoys the status of having the strongest & most well entrenched superbike network in India. DSK Motowheels is known for its high-end biking experience, extended product line, technology and quality. DSK Motowheels also prides itself in providing the best customer centric service and aftersales support in Indian Superbike Market.

FROM HISTORY TO THE LEGEND

As often happens, the history of great industries is born in garages. In our case this is the Benelli Garage”, Where, in 1911, the 6 Benelli brothers Giuseppe, Giovanni, Francesco, Filippo, Domenico and Antonio, known as “Tonino”, repaired and manufactured motorcycle parts. In 1921 the ‘Velomotore’ was created: a single cylinder two stroke 75cc bike adapted to a bicycle frame and the following year it was the turn of the 98cc ‘Motoleggera’, immediately appreciated by the public of that time. The first real Benelli motorcycle, a 175cc model, ridden by Tonino, proved immediately to be a winner in the world of competition. Here began a long list of glorious moments, with more than 1000 victories in the Italian and European Championships and two World Titles won in 1950 and 1969. Many legendary riders have ridden Benelli motorcycles. Besides Tonino, the owner of the company, the Italian riders Ambrosini, Grassetti, Campanelli, Provini, Pasohni, Villa and the internationals  Saarinen, Hailwood and Carruthers.

At the end of the 60’s the last motorcycle of the family owned company was born; the Tornado 650 which developed 50hp at 7000 rpm, and easily surpassed 170 km/h. Later the first ownership change took place, but motorcycle production  continued in Pesaro with the ground breaking in line 6 cylinder 750 and 900cc Sei’s which were manufactured up until the early 1980’s. In 2001 the production of the first all new in-line triple powered range began, with the fully faired super sport Tornado 899cc Limited Edition. The addition of the Tornado Naked Tre or TNT for short, and subsequently the Tre-K in both 899 and 1131 cc variants meant that Benelli was truly back in the market of large capacity sports motorcycles. Today Benelli is part of the Qianjiang (QJ) Group, a corporation which produces more than 1.2 million two wheelers per annum. QJ, wishing to respect the tradition of passion which has always guided the history of the Italian brand, will continue manufacturing bikes in Pesaro, the traditional home of Benelli Motorcycles.

DSK Benelli Mysore showroom will retail bikes under the dealership of ‘Shubha Motors’ DSK Motowheels, announces the launch of an exclusive showroom for the legendary Italian superbiking brand Benelli, in Mysore. With the opening of […]

After witnessing an exceptional response in Pune, DSK Motowheels, opened a new exclusive showroom for Italian superbiking brand Benelli in the city. The state-of-the-art showroom is situated in a plush locale at ‘Fortune, Baner road, […]