Benelli commenced operations in the year 1911, making them the oldest Italian motorcycle company. The firms colourful journey began as the ‘Benelli Garage’ in 1911, where 6 Benelli brothers Giuseppe, Giovanni, Francesco, Filippo, Domenico and Antonio (also known as Tonino) worked together passionately repairing and manufacturing motorcycles. Benelli went on to earn accolades in the action packed world of motorsports, with Benelli bikes quickly earning the illustrious distinction of playing a key role in over a thousand victories in the Italian, European and World racing championships since 1939. Born of this rich, pure lineage, Benelli today boasts an impressive range of capable, globally respected Superbikes that marry heritage, innovation, styling and technological prowess. Benelli’s distinctly stylish motorcycles are known for their Italian flamboyance and the ability to provide riders from all walks of life a pure, high performance experience. 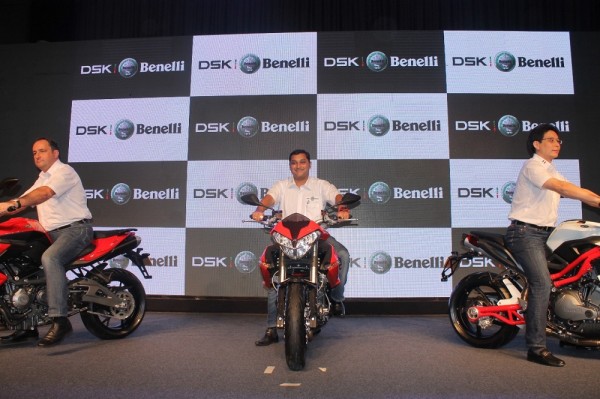 Mr. Frank Zhuang, Board Director of Benelli QJ SRL who was present at the historic tie-up announcement said “After establishing our footprint in nearly 30 countries like Italy, Germany, France, China, UK, USA, Australia and Spain to name a few, we now wish to introduce some of the world’s best designed and performing superbikes to the second largest two wheeler market in the world. The Indian two wheeler market is growing at a volume of 10-12% and is set to achieve a size of 21-23 million units by 2015-16.”

“Indian market is the most important market for Benelli, and this will become one of the biggest markets for us in terms of sales.  Our partner DSK has a profound knowledge and good experience in the Indian Superbike market. DSK Motowheels are today the fastest growing Superbike Company in India with strong financial power. We firmly believe Benelli will have great success in India with DSK as its partner, by launching right products at the right time with the right pricing,” he further added.

Mr. Shirish Kulkarni, Chairman of DSK Motowheels said “We are extremely proud to partner with the oldest Italian Motorcycle brand Benelli and excited to bring the largest range of Italian superbikes into India. We are confident we will revolutionize the Indian Superbike Industry with our understanding and experience in the Indian Superbike market, and the ability to put up a wide dealer network coupled with an impressive line-up of Benelli superbikes that offers something for every rider”.

DSK Motowheels will play a pivotal role assembling and selling Benelli bikes across the country and supporting them with a good backup of service and spares. Elaborating on their marketing plans Mr. Kulkarni said that DSK Benelli will set up exclusive dealerships in 20 cities over the coming 6-8 Months.  An Initial round of dealerships will come up in the Indian cities of Mumbai, Pune, Delhi, Hyderabad, Bangalore, Chandigarh, Chennai and Kolkata in next 3-4 months.

This landmark Indo-Italian tie-up paves the way for a high-end biking experience through Benelli’s extensive bike range, giving Indian bikers their ticket into the club of thoroughbred motorcycling aristocracy.

Established in 2012, DSK Motowheels, a part of the DSK Group (Diversified business group with a turnover of over Rs. 5000 crores) forayed into the growing automobile sector by entering the niche segment of powerful and aspirational bikes.

With a CKD plant in Maharashtra, the brand enjoys the status of having the strongest & most well entrenched superbike network in India. DSK Motowheels is known for its high-end biking experience, extended product line, technology and quality. DSK Motowheels also prides itself in providing the best customer centric service and aftersales support in Indian Superbike Market.

FROM HISTORY TO THE LEGEND

As often happens, the history of great industries is born in garages. In our case this is the Benelli Garage”, Where, in 1911, the 6 Benelli brothers Giuseppe, Giovanni, Francesco, Filippo, Domenico and Antonio, known as “Tonino”, repaired and manufactured motorcycle parts. In 1921 the ‘Velomotore’ was created: a single cylinder two stroke 75cc bike adapted to a bicycle frame and the following year it was the turn of the 98cc ‘Motoleggera’, immediately appreciated by the public of that time. The first real Benelli motorcycle, a 175cc model, ridden by Tonino, proved immediately to be a winner in the world of competition. Here began a long list of glorious moments, with more than 1000 victories in the Italian and European Championships and two World Titles won in 1950 and 1969. Many legendary riders have ridden Benelli motorcycles. Besides Tonino, the owner of the company, the Italian riders Ambrosini, Grassetti, Campanelli, Provini, Pasohni, Villa and the internationals  Saarinen, Hailwood and Carruthers.

At the end of the 60’s the last motorcycle of the family owned company was born; the Tornado 650 which developed 50 hp at 7000 rpm, and easily  surpassed 170 km/h. Later the first ownership change took place, but motorcycle production  continued in Pesaro with the ground breaking in line 6 cylinder 750 and 900cc Sei’s which were manufactured up until the early 1980’s. In 2001 the production of the first all new in-line triple powered range began, with the fully faired supersport Tornado 899cc Limited Edition. The addition of the Tornado Naked Tre or TNT for short, and subsequently the Tre-K in both 899 and 1131 cc variants meant that Benelli was truly back in the market of large capacity sports motorcycles. Today Benelli is part of the Qianjiang (QJ) Group, a corporation which produces more than 1.2 million two wheelers per annum. QJ, wishing to respect the tradition of passion which has always guided the history of the Italian brand, will continue manufacturing bikes in Pesaro, the traditional home of Benelli Motorcycles.

After witnessing an exceptional response in Pune, DSK Motowheels, opened a new exclusive showroom for Italian superbiking brand Benelli in the city. The state-of-the-art showroom is situated in a plush locale at ‘Fortune, Baner road, […]