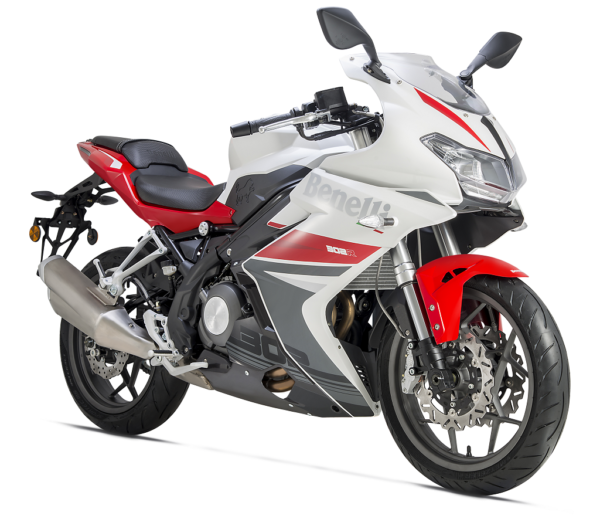 The Benelli 302R directly descends from the lineage of Tornado.

Featuring the Benelli trademark trestle frame, the Benelli 302R offers an exemplary performance and enthralling biking experience with unmatched manoeuvrability, even in the harshest of all conditions according to the company.

The Tornado 302R is a fully faired version of the TNT300 naked bike and was previously showcased at the 2016 Auto Expo in Greater Noida.

Featuring the Benelli trademark trestle frame, DSK Benelli 302R offers an exemplary performance and enthralling biking experience with unmatched manoeuvrability, even in the harshest of all conditions.

The Tornado 302R uses the same 300cc, liquid cooled, 4-stroke, 4-valve, DOHC, twin-cylinder engine, which is mated to a 6-speed gearbox expected to develop 35 BHP and 27 Nm of peak torque.

The Benelli 302R will be launched next month and will compete against the likes of the Kawasaki Ninja 300, KTM RC390, Yamaha YZF-R3 and the upcoming TVS Apache RR 310S which shares its motor with BMW G310R.

“It is quite overwhelming to see that DSK Benelli 302R is receiving such a positive customer response even before it has entered the market. This signifies the trust and brand salience that DSK Benelli has been able to develop amongst the Indian motorcycle enthusiasts. What’s more remarkable about 302R is the fact that the fully faired sports bike is a true manifestation of the Tornado pedigree, whose legacy has enchanted the global superbiking community for about half a century now. Since advance bookings for the premium bike have been initiated, we are foreseeing strong disruptions in the Indian mid-range biking segment.”

DSK Benelli 302R comes loaded with a 300cc, in-line two cylinder, water-cooled, four-stroke engine. The launch of the sports bike is being perceived as DSK Benelli’s attempt to capture the massive mid-range biking segment and acquainting more customers with superbiking through an entry-level motorcycle bearing the legendary brand’s name.

Motul ties-up with DSK Benelli as a lubricant partner

DSK Motowheels has been making successful strides in the Indian by bringing two international superbike makes namely Hyosung and Benelli. The Pune based company has also started local assembly to keep prices low and allow […]

DSK Motowheels, one of India’s established and strongest players in the Superbike industry today announced a landmark partnership with well known Italian motorcycling legend – Benelli. Benelli commenced operations in the year 1911, making them […]

Benelli to launch TNT 25 on the 18th of December