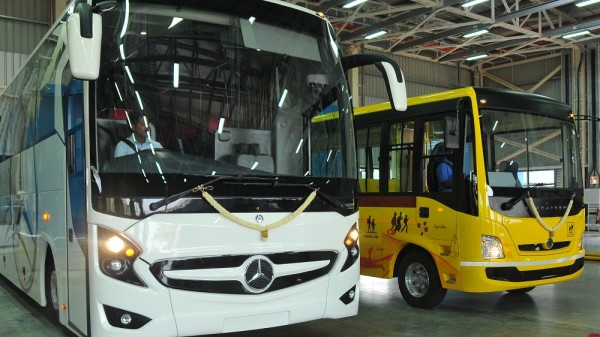 Today, the first BharatBenz bus has rolled off the production line at the Daimler India Commercial Vehicles (DICV) plant in Oragadam. The start of production marks the beginning of another chapter in DICVs success story as it becomes a full-fledged CV manufacturer in the Indian market. The buses are designed and manufactured keeping the evolving market needs and consumer expectations in mind to establish new standards in the Indian bus segment.

BharatBenz buses manufactured at the Oragadam plant will be front-engine for short distance travel targeting school, staff and tourist transportation. The premium segment will be addressed with Mercedes-Benz rear-engine buses for inter-city transportation. The new plant will manufacture buses with gross vehicle weight of 9, 16 and above 16 ton range. The first to roll off the line was a BharatBenz school bus.

With the new BharatBenz school bus DICV wants to raise the bar in terms of safety for a secure transport of children. The school buses are equipped with the latest safety features. In combination with reliability and low running costs for schools, they are a great choice for operators. Next to the school buses, the BharatBenz staff buses are a cost effective and a comfortable mode of transit for employees. The newly developed buses are provided with several features that ensure a smooth ride to office. In addition to this, BharatBenz tourist buses are designed towards high fuel efficiency and low maintenance cost to minimize expenses for operators. The visually appealing and comfortable buses help the operator to focus on maximizing his profits.

With the new multi-axle coach DICV is introducing the next generation of Mercedes-Benz buses and the first 15m bus in India. The light weight body and the high end styling together with the increased capacity make it the most attractive product for intercity applications.

Speaking on the Occasion, Mr. Markus Villinger, Managing Director, Daimler Buses India said, “It is a significant occasion for us as we start production of Made in India buses for the Indian market at our Oragadam plant. The buses are engineered to provide value to our customers and offer them suitable products with our two brand strategy. We see enormous potential for growth in the market as the volume of the Indian market for buses weighing over eight tons is set to double by the year 2020.”

DICV plant in Oragadam and export of bus chassis

After today’s start of production of buses, the DICV plant is the only Daimler Trucks plant worldwide to produce trucks, buses and engines with three brands – Mercedes-Benz, BharatBenz and FUSO – under one roof. The bus chassis are rolled out from the same assembly line as that of BharatBenz trucks, as they are technologically similar to the medium-duty BharatBenz trucks. This showcases once more the flexibility of DICV’s assembly lines. Before the local bus production started, DICV has already started to export its bus chassis from India to Egypt in February, other markets to follow in future. Because the chassis are technically similar to those of the medium-duty BharatBenz truck, export activities from Chennai started even before the bus plant opened

Daimler India Commercial Vehicles (DICV) is a 100% subsidiary of Daimler AG, Stuttgart, Germany. DICV is a fully fledged commercial vehicle player in the Indian market. It currently produces and sells above 9 to 49 tonne trucks for the Indian volume market, under the brand name – BharatBenz. BharatBenz stands for Indian engineering with German DNA. Under its bus division, the company will produce and sell BharatBenz buses and Mercedes-Benz buses from its manufacturing plant at Orgadam. Bharat-Benz products have been engineered to serve all major customer segments with a focus on total-cost-of ownership, safety, reliability and comfort.

Under the umbrella of Daimler Trucks Asia, DICV and MFTBC (Mitsubishi Trucks and Bus corporation) are optimizing research activities, product development and sourcing. The DICV built FUSO trucks from Oragadam are exported to markets in South East Asia, Africa, and Latin America.

The state-of-the-art production plant at Oragadam, near Chennai, spreads over 400 acres (160 hectares). It includes a modern test track designed to simulate Indian conditions – making it one of its kind in Asia. DICV has made an initial investment of 4,400cr and additional 425cr for the bus plant facility (approximately €750 million). Sustainability being a core of Daimler’s corporate culture, DICV will focus on creating efficient, reliable and ecologically friendly products.

BharatBenz commercial vehicles have become even more affordable with the introduction of GST on 1st July 2017 as the truck and bus maker is passing on GST benefits to customers. The company has reduced MRPs […]